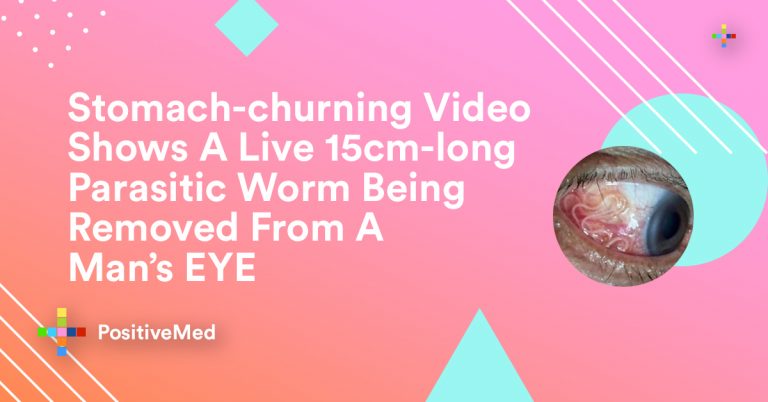 Stomach-churning video footage has gone viral when the doctors were removing a wriggling parasitic worm from a man’s eye. The Indian man whose name is not mentioned was complaining of itching and pain in his eyes before he decided to seek the help of medical professionals.

Awed doctors discovered the parasite, which was measuring 15 centimeters, squirming in one of the man’s eyeball and took it out.

Upon conducting further tests, doctors came to discover that there were other worms in the blood of the 60-year-old man from Karnataka – a state found in the south-west of India.

The man decided to get help at the New Medical Center in Kundapur. Doctors could not explain how the worm got into the eye of the man.

Ocular filariasis is the actual medical name for having a parasitic worm or its larvae in the eye. These worms are normally transmitted through mosquito bites.

It is estimated that about 120 million people, mostly in Central Africa, Asia, South America, and Central America are infected with this worm. However, it is rarely found in the eyes.

The parasitic worm in the man’s eye was noticed by Dr. Srikanth Shetty. He identified it as being from Wuchereria Bancrofti species.

According to Dr. Shetty, the worm had the ability to permanently damage the eyesight of the man if it had not been removed immediately.

Speaking to local reporters, he said that the challenge was to remove the worm live because killing it inside the man’s eye could have led to complications. He also noted that it was quite challenging to pin it down because it was moving around. The man also had worms in his blood and was put on medication.

This happens to be a type of parasitic worm that infects humans and disrupts the lymphatic system. According to the WHO, it can lead to a condition known as lymphatic filariasis. When an infected mosquito bites a person, it transmits a parasitic larva, which then moves to the lymphatic system and continues to grow. This system consists of a network of vessels that helps the body to fight infections.

The worms can live in the body for up eight years and can produce millions of larvae that circulate throughout a person’s blood to other organs. Apparently, this is what happened to the Indian man.

Infections from these worms normally don’t cause noticeable symptoms. However, the World Health Organization (WHO) says that it can cause damage to the lymphatic system and the kidney. This can alter the immune system. In some cases, the infection can develop into a chronic condition and cause severe inflammation or swelling of the skin.

The good news is that such parasitic worms are not found in the United States. This is according to the Centers for Disease Control and Prevention.

This footage came after DailyMail Online published the horrific video coverage when a surgeon was removing a live and wriggling leech from the nostril of a patient. It is suggested that the undisclosed patient from Malaysia fell into the odd predicament when he was swimming in a river a few weeks earlier.