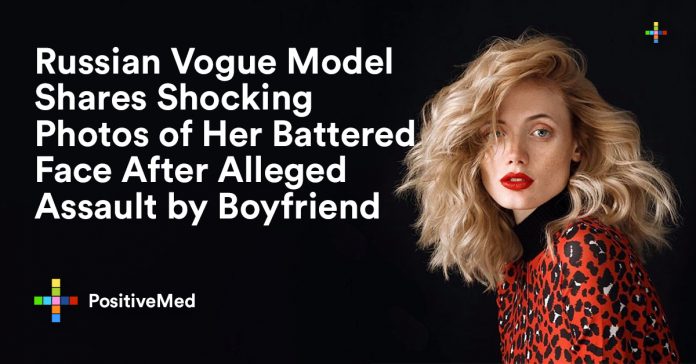 Kira Dice, a famous model who has shot for Russian Vogue magazine, shocked and upset her fans in November 2018. Using social media, she revealed that her boyfriend attacked her in her home in Moscow, throwing chairs and hitting her. Kira says she hopes her pain can help to raise awareness over the issue of domestic violence.

Because she was afraid to upset her boyfriend even more, and maybe encourage another attack, Kira says she did not report the beating to the police when it initially happened. This is a common experience. As the advocacy group, Domesticshelters.org has reported, most women do not report their abusers to the police.

The model described the graphic abuse, opening up about the details of the violence. Her boyfriend attempted to rape her, stuffed money in her mouth to make her chew it, and knocked her unconscious. The incident was so loud that neighbors knocked on the door and an ambulance came to help her.

Writing on Facebook, Kira said, “I ask you not to be indifferent to domestic violence.” Many women do not speak up or do not have an audience to hear their stores, Ms. Dice is using her large online platform to spread awareness of the issue. She hopes to reduce the amount of domestic violence around the world. She encourages women who are victims to seek help.

The pain caused by an abusive partner can go well beyond the healing of the bruises. Psychological pain can stay after the physical wounds have healed. The National Domestic Violence Hotline, in a study, reported that “81% of women who experienced rape, stalking, or physical violence by an intimate partner reported significant short- or long-term impacts such as post-traumatic stress disorder symptoms and injury.” Also, Australia’s National Research Organisation for Women’s Safety found that abuse can cause many mental health problems. They say “Anxiety disorders made up the greatest proportion of this attributable burden (35%), followed by depressive disorders (32%) and suicide & self-inflicted injuries (19%).”

Kira’s story is sad, but it is hardly unique. Many other women have similar experiences. With an organized effort, she believes the problem can be addressed. When celebrities like Kira, with her strong base of support, speak out, then the issue of domestic violence can gain more media attention. Kira hopes this is the lasting impact of her devastating situation will be the empowerment of women to overcome these types of abusive situations.