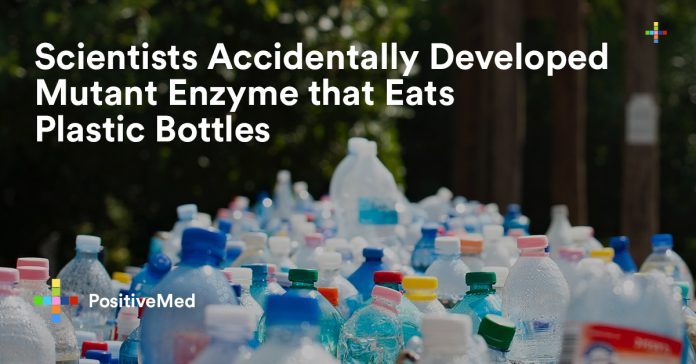 Scientists have accidentally developed a mutant enzyme with the ability to consume plastic bottles. This is a major breakthrough that can bring an end to the global pollution.

This new research was prompted by the discovery of a bacterium in 2016 that naturally evolved to consume plastic in Japan at a waste dump. Scientists managed to come up with a detailed structure of this important enzyme the bug produces.

The international team of researchers tried to figure out to find out how the bacterium had evolved, but tests show they had accidentally come up with the molecule that could efficiently break down PET (polyethylene terephthalate) plastic commonly used to make soft drinks bottles.

According to the lead author, Prof John McGeehan, at the University of Portsmouth in the UK, they were shocked when it turned out that they had improved the enzyme.

Unlike the many centuries it takes in the oceans, this mutant enzyme takes only a few days before it starts breaking down the plastic. Researchers are hopeful that the process can now be sped up even further such that it becomes a feasible large-scale process.

McGeehan said they are hoping to use this enzyme to turn plastic to its original component so that they can recycle it back into plastic. He added that this means they won’t have to dig up more oil and that that it will cut down on the amount of plastic in the environment.

Approximately, 1 million plastic bottles are sold per minute all over the world and only 14% are recycled. Most of them end up in oceans where they harm marine habitats and people who consume seafood.

Currently, recycled plastic bottles are turned into opaque fibers that are used for carpets and clothing.

What Spurred The Study?

This study which was published in the journal Proceedings of the National Academy of Sciences started by identifying the exact structure of the enzyme the Japanese bug produces. The researchers used the Diamond Light Source, which is an intense beam of X-rays. The light is 10 billion times stronger than the sun and has the power to reveal an individual atom.

The structure of this enzyme appeared very close to the one evolved by many bacteria to break down a natural polymer that serves as a protective coating on plants called cutin. While the researchers were manipulating the enzyme to find out the connection, they inadvertently perked up its ability to break down the PET.

McGeehan said that theirs was a modest improvement and the enzyme is not yet optimized. He added that they have an opportunity to use every technology in other enzyme development in the future to make it a super-fast enzyme.

A typical example comes from industrial enzymes that are used in the production of biofuel and washing powders. They have been worked up to hundreds of times faster in just a few years. This is the same scale that McGeehan and his team envisage for the plastic-eating enzyme. The specific mutant gene has already been patented by researchers from the US National Renewable Energy Laboratory in Colorado and those from Portsmouth.