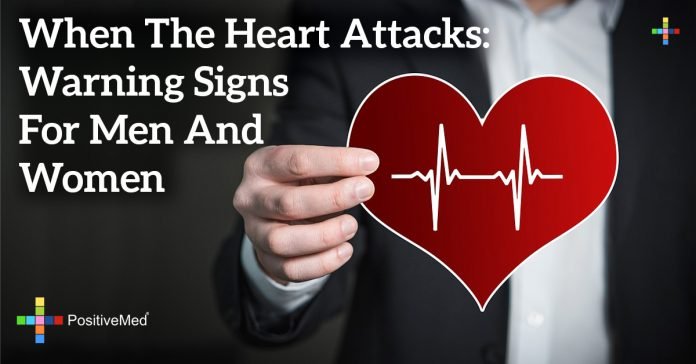 When the Heart Attacks: Warning Signs for Men and Women

A silent killer lurks, ready to strike anyone, anywhere. One second, the victim is fine, but in an instant he can hit the floor, clutching his chest. Heart attacks don’t discriminate from age or generate. It doesn’t matter if you are in optimal health or a 25 year old woman. More than 750,000 Americans have heart attacks each year, and that number is not getting any lower. Heart attack symptoms are not crystal clear and vary depending on individual factors, so it is imperative people familiarize themselves with the most common signs of an impending heart attack.

The factors that heighten the probability of a heart attack are family history of heart disease, cigarette smoking, excessive alcohol use, physical inactivity, high blood pressure and cholesterol, type II diabetes and obesity. However, that doesn’t mean an attack can’t happen to you or a loved one. Even if you don’t fit into the ‘at risk’ category, never ignore the warning signs.

According to the Society of Cardiovascular Patient Care, catching a heart attack early increases chances for survival exponentially. The Society suggests everyone learns Early Heart Attack Care (EHAC). 85% of heart damage occurs within the first two hours of a heart attack, meaning you need to react rapidly.

Yet, a surprising statistic from the American Journal of Critical Care in 2010 found that most men wait 6 hours before calling 911. This results in many unfortunate and untimely deaths. Don’t become a statistic. Learn the symptoms and react appropriately.

RELATED ARTICLE: HERE’S HOW YOUR HAIR CAN PREDICT HEART ATTACK RISK MONTHS BEFORE

The risk of having a heart attack is more likely for men than it is for women. If you have any of the risk factors, be extra vigilant.

Chances are you will develop the symptoms overtime, usually after periods of exertion, and think nothing of them, until the signals can no longer be disregarded. In 2008, the American Journal of Critical Care stated that 10% of men experienced no chest pain, and that diabetics are prone to painless heart attacks.

The usual symptoms reported in men are:
– Chest pain and pressure, as if a weight is sitting on your chest, that intensifies overtime. This has also been called “fullness,” as if the chest is suddenly swelling.
– Upper body pain or discomfort that could be anywhere aside from the chest. Shoulder and arm pain is often reported.
– Intense muscular fatigue
– Rapid or irregular heartbeat, often described as “stuttering” or “skipping”
– Indigestion
– Breathlessness even when at rest
– Lightheadedness
– Cold sweat

RELATED ARTICLE: How Does It Really Feel to Have a Heart Attack According to Men Who Suffered From It

Women have been found to have much different signs then men, but not enough women know what those symptoms are. Because of this, close to 50,000 women died from heart attacks in 2014. 50% of women experiencing a heart attack don’t even get the signature chest pain, which leads to them putting off treatment. Sometimes, even a doctor with mistake the symptoms as something else, like heart burn. Be insistent on receiving an EKG or an enzyme blood test, because those are the two tests that will save your life in the event of a heart attack.

Other Signals to be aware of are:
– Unfamiliar discomfort, tightness or pressure in the center of the chest
– Crushing pain that radiates throughout the body
– Pressure spreading throughout the limbs
– Jaw, shoulder or neck pain (or a combination of all three)
– Dizziness or nausea
– Clammy sweats, heart flutters and paleness
– Unexplainable feelings of fatigue
– Abdominal pain, sometimes confused with bloating or an upset stomach
– Shortness of breath, especially during downtime
– Feeling like you have influenza

Every Second Counts
High numbers of death from heart attacks suggests that people don’t know the warning signs. As soon as you suspect a heart attack, call 911. The longer you wait, the worse the damage. Never transport the person or drive yourself to the hospital. Paramedics are equipped to not only get you to the hospital quickly and safely, they can provide medication, oxygen and monitor your heart rate. During the, help yourself or the afflicted by limiting physical activity and chewing some aspirin.

A heart attack is a life-threatening event. When it comes to survival, the best thing every man and woman can do for themselves is to not take the signs lightly. Remember that a heart attack doesn’t always mean crippling chest pain. Trust your intuition, and don’t hesitate to seek medical attention if something doesn’t feel right.
[/nextpage]