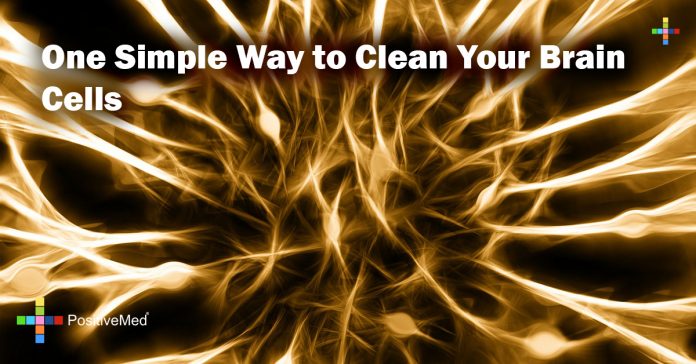 One Simple Way to Clean Your Brain Cells

If you are not getting enough sleep you should start now. Research shows while you sleep your brain stays busy flushing toxins from your brain cells which may reduce your risk of contracting Alzheimer’s Disease.

A study conducted on mice found that the flow of cerebrospinal fluid increases substantially during sleeping hours, it cleans brain cells by removing harmful waste proteins that your brain produces during waking hours.

Brain cells shrink while you snooze, making more space for cleanup. “Sleep changes the cellular structure of the brain. It appears to be a completely different state,” explained Maiken Nedergaard, M.D., D.M.Sc., co-director of the Center for Translational Neuro-Medicine at the University of Rochester Medical Center in New York, a leader of the study.

This action cleans away the byproducts of activities we perform during our busy time, including beta-amyloid protein, clumps of which form plaques found in the brains of Alzheimer’s patients.

This is just one repercussion of not getting enough sleep. Scientists explain when we don’t get enough sleep we prevent our brain from performing cleanup activity, which is why we suffer from sleep deprivation, a sleep-deprived body has slower reaction times, a weaker immune system, and many other problems.

The study found that our glymphatic system is about 10 times more active when we sleep. It was also found that the brain undergoes physical changes that assist the system to perform the function faster and more efficiently.

There seems to be some confusion as to why different animals require different hours of sleep. For example, cats require more than 12 hours sleep, while elephants sleep only about 3 hours or so. Neuroscientist Suzana Herculano-Houzel believes that such variation is probably linked brain size. Larger brains have more space between cells to accumulate toxins and don’t require as much work to clean, while smaller brains take more work as there is not as much space between cells.

The technique two-photon microscopy was used to monitor the movement of cerebrospinal fluid in a mouse brain in real time. Study author Lulu Xie put the mouse to sleep and added fluorescent dye to the fluid. During sleep the fluid was noted to move rapidly due to increased space between cells, another study found that the space between brain cells increases by 60%, which makes room for the fluid to flow freely and flush toxins.

When the mouse was woke up Xie again injected the dye and observed the movement, when awake the movement of the fluid was substantially constrained.

The reason your brain needs rest to do this is because the entire process requires a lot of energy and it’s not possible for the brain to perform multiple functions efficiently. Our brains require rest. Prolonged lack of sleep may even result in death. The cleaning process has not yet been observed in humans but there seems to be a link between human brain diseases like Alzheimer’s and sleep. Researchers that study Alzheimer’s also believe there is some possibility to control the disease. Randall Bateman, a Professor of Neurology at Washington University in St. Louis says, “It does raise the possibility that one might be able to actually control sleep in a way to improve the clearance of beta amyloid and help prevent amyloidosis that we think can lead to Alzheimer’s disease.” Bateman was not involved in this study.