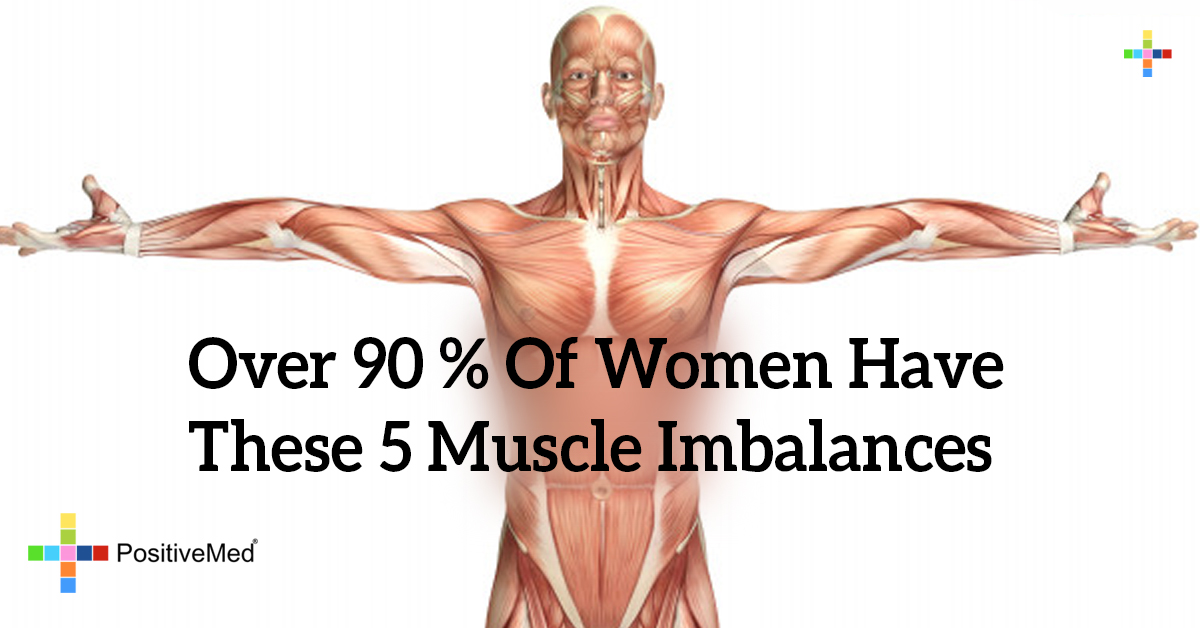 Over 90 % of Women Have These 5 Muscle Imbalances

Muscle imbalances occur when one group of muscles, for example, hamstrings, is stronger than its opposing group, in this case, the quadriceps. Every woman has, at least, five of these imbalances, and they are becoming increasingly common as more and more of us are sitting at a desk for extended periods of time, and physical activity is on the decline. It is important that you learn to recognize these imbalances because they can lead to serious injuries and undo all of the hard work that you’ve put in at the gym.

Here are the five most common imbalances and how to treat and prevent them from
occurring.

This imbalance is most often seen in runners and those who sit at a desk for hours every day, and typically involves a weak and tight hamstring combined with stronger quadriceps. Knee injuries are common when these two muscle groups are out of balance, as the knee gets pulled in the direction of the stronger muscle group.

The best lower-body exercises to prevent this imbalance are the stiff-legged deadlift and the squat. These are large movements that allow the lower body to function as a whole, as it was designed to, rather than focusing on a single muscle. Avoid exercises such as leg curls and quadriceps extensions that target only one muscle group, as they will only cause further imbalance. Also, stretch regularly, ideally after you work out because the muscle will be warm.

The biceps and triceps are the muscles that form the upper arm and are responsible for flexing and extending the elbow. Any imbalance that occurs within this group is usually due to repetitive movements, such as a hairstylist who cuts hair all day, holding her arm in a partially flexed position for hours at a time.

This muscular imbalance is characterized by one muscle being extremely tight with pain ranging from moderate to more severe. Also, characteristic of this is a muscle knot that can actually be felt. One of the best ways to treat and prevent this is with yoga. Yoga emphasizes long, powerful movements that exercise the muscles by elongating them and for that reason is a wonderful addition to any routine.

This muscle imbalance is characterized by rounded shoulders and upper back. It is caused by tight pectoral muscles in the chest which pull the shoulders forward and the back out of position. Over time, this can harm your posture and cause the neck to become misaligned. It is almost exclusively caused by sitting hunched over a desk as well as placing too much emphasis on chest exercises and neglecting the back.

Fortunately, there is an easy fix: Rowing either with a machine or free weights. Combine this with deep stretching across the chest to help it expand. If the imbalance has affected your posture, practice walking as if you were suspended from a string attached to the top of your head. This will place your spine and neck in the proper alignment.

Left side and right side

The single biggest cause of this type of imbalance is simply favoring one side over the other. People that play sports will perform one activity with their dominant side (think throwing a ball) and use the opposing limb to balance themselves. Watch a professional baseball pitcher for a perfect example of this.

To an extent, this is unavoidable because we all favor one side over the other. But it can definitely be minimized by practicing large, full body weight movements when at the gym. Again, avoid single-joint exercises such as biceps curls, and focus on the classic “power movements” such as deadlifts and squats, including pushups and pull ups. In addition to being far superior to small, tiny movements, every one of these requires that you use your body equally on both sides at the same time, helping you achieve balance and symmetry.

Outer muscles and the core

These are the muscles that we can see vs the ones that we can’t. Core muscles are essential for stability and suffer greatly from prolonged sitting.

There seems to be much more confusion over what the core actually is. Your core is made up of your trunk and your hips and includes as many as 35 different muscles groups that are underneath your bodies outer muscles. The core is responsible for your bodies stability and strength. It is both your center of gravity and stability. It is where all movement originates. If the core muscles are weak it will impact every physical activity that you do.

Imbalances occur because of our tendency to focus on the muscles that we see in the mirror. What happens with a core/outer muscle imbalance is that the outer muscles begin to try and compensate for the weakened core, causing further imbalance and increasing the likelihood of injury, as literally every movement we make depends in some way upon our core.

Since the core provides strength and stability, that is also the best way to work it. Stability exercise such as a plank are a good place to start, but if you want a routine that challenges and strengthens your core on every level, nothing is better than yoga or Pilates. These use your own bodyweight as resistance, working the body as an organic whole, rather than one body part at a time.

Identifying a muscle imbalance is the first step in sculpting a healthy and symmetrical body. This article should give you a good foundation of the most common imbalances that most women have. For a more in-depth analysis, it is a good idea to visit a physical therapist for a functional movement analysis. This will identify the precise areas of your body that may need attention.