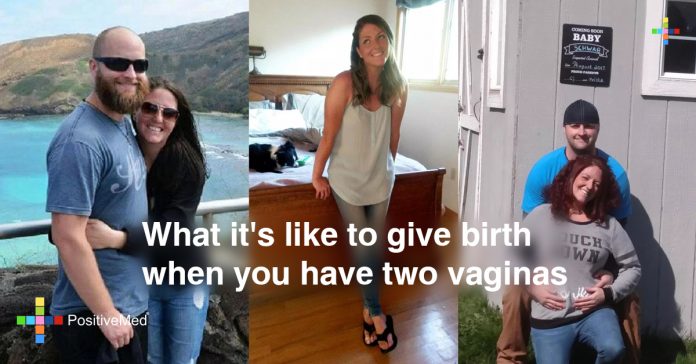 Uterus didelphys is a rare, genetic anomaly in which a woman is born with two uteruses. What happens when a person with such a condition gets pregnant? Well, ask Laurie Martino, who has this medical anomaly. Her life has been plagued with many health issues from the time she was three years old. However, it wasn’t until she became pregnant at 26 years of age that her rare condition was identified.

Martino recalls the constant urinary tract infections that began when she was a toddler. She was diagnosed with kidney reflux disorder, but during all the scans, no one said anything about her womb abnormalities. Unlike other girls, she didn’t start her menstrual cycle until she was 16 years of age. However, when she did get her period, it was never regular. She recalls lying in bed constantly with horrible cramping.

When she got pregnant, the doctors did several sonograms. However, they didn’t detect the two vaginas. It wasn’t until doctors couldn’t flip her breeched son that things took a strange turn. Going through an emergency, C-section brought about big surprises. When the doctor opened her up, he found two wombs.

Errors in The Embryonic Stage of Development

Most of the women who suffer from this condition don’t know they have it. The abnormality occurs during the development of the embryonic stage. The uterine horns form and eventually fuse into two tubes. However, in this condition, the process fails to occur as the cells don’t properly migrate. Three things can happen; a woman can have two cervixes, uteruses or vaginas. It’s still possible to get pregnant with this condition, but most of the time it renders a woman infertile.

No doubt it’s a medical mystery to doctors. Take, for instance, Victoria Pottle. She never dreamed she would give birth to three children. They found her rare abnormality at 20 years of age. She was born with one ovary and fallopian tube, but she had two uteruses and cervixes. It was dangerous for her to give birth because she had a thin vaginal septum. When it dissolved during childbirth, she remembers all the doctors rushing in to assist. She recalls feeling like she was on a television show where they highlight strange medical conditions.

Infertility occurs at such a high rate because the uterine lining is often abnormally thin. The vaginal lining must be thick for conception to occur. The egg needs it to attach to the wall for the placenta to form. If the lining is too thin, the egg cannot attach properly. Also, when there are two wombs, they are often misshapen and cannot accommodate a growing fetus. If the baby does make it past the first trimester, then they can lack space due to the incompetent cervix. Almost all cases where a baby is carried to term are delivered via cesarean.

Medical professionals are learning more about uterus didelphys. It’s not always easy to spot this rare condition during the annual gynecological check-ups, and abnormalities in the teenage years are often written off. Though this condition is challenging to manage while pregnant, many of those that suffer from two vaginas can deliver healthy babies.