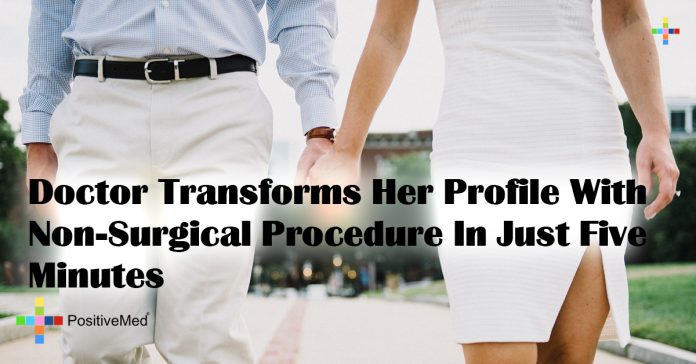 As plastic surgery becomes more common, new and innovative techniques are being created. One Beverly Hills cosmetic surgeon has created a technique to entirely change the shape of a person’s nose in just five minutes. This non-surgical procedure creates an amazing effect without all of the horrible side effects of the normal nose job, and one woman was thrilled with the results.

Dr. Simon Ourian is a Los Angeles cosmetic surgeon that is extremely popular among celebrities. His clients include famous people such as Kylie Jenner, Sofia Vergara, and Cara Delevigne. Joanna Della-Ragione first heard of the doctor after she saw an Instagram post of Cara Delevigne that praised his clinic, Epione. Dr. Ourian is known for his non-invasive procedures that just use simple injections of Botox and fillers to contour the face without intensive surgery. His office provides non-surgical nose jobs, chin enhancements, and jaw defining that uses nothing but fillers to provide astounding results.

Joanna had always been slightly dissatisfied by her nose, which had a slightly bulbous tip and an upturned bridge. However, she had never seriously considered a nose job, since it requires weeks of recovery and is very painful. When she realized how simple it could be to change her nose, she worked hard to get an appointment with Dr. Ourian. After an initial consultation, Dr. Ourian suggested adding fillers along the bridge of her nose to straighten and widen it, so that the bridge would balance the wider tip.

At her appointment, Joanna was amazed by how simple everything was. She did not have to go under general anesthesia or spend hours in surgery. Instead, the procedure just took five or six minutes. A simple anaesthetic ointment numbed her face so that she did not feel any pain during the procedure. Then Dr. Ourian carefully injected fillers to build up the bridge of Joanna’s nose to straighten and balance the overall appearance.

Joanna compared the whole procedure to a simple trip to the dentist. It was slightly uncomfortable but over very quickly. Afterwards, there was not any swelling, bruising, or intense pain to deal with, and Joanna was able to go out to dinner that night. Though the effects are very subtle, her nose is noticeably straighter and more proportionate. The effects will gradually wear off in a couple of years, but Joanna says that it was definitely worth it.

Since he is a doctor for many celebrities, it is no surprise that Dr. Ourian is somewhat expensive. The non-surgical nose job runs between $1,500 and $3,000. Prices change depending on which fillers are used. Restylane only lasts six months, so it is cheaper than Voluma, which lasts up to two years.

Dr. Ourian says that his services are very popular with “people who just want a subtle change and don’t want to go into surgery.” Many people also enjoy the reversibility of the procedure. Unlike a permanent cosmetic change, fillers can be dissolved and removed if a client decides that they prefer their old features. However, most of Dr. Ourian’s patients do not ask for a reversal, since they love the results. Instead of trying to alter an entire face, the procedures of Dr. Ourian focus on enhancing and refining people’s existing, natural beauty.