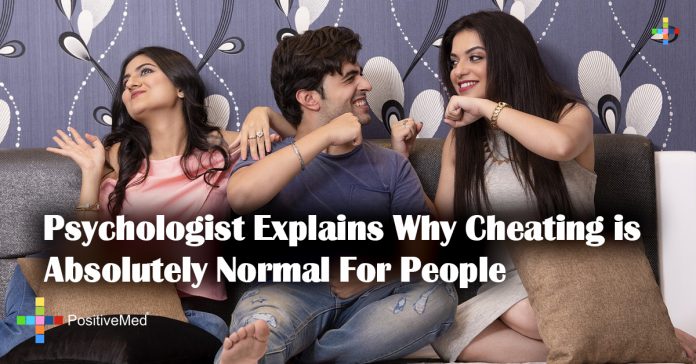 Psychologist Explains Why Cheating is Absolutely Normal For People

The overall perception of infidelity in a marriage is disapproval. As humans, we vow to spend our life with one single partner without straying towards other men or women. The New York Times reports that 91% of Americans find it morally wrong to cheat on a spouse. While sleeping around when in a committed relationship is frowned upon, a new book entitled “Out of Eden” by Professor David P. Barash suggests that our natural and biological state may be more prone to being polygamous. When interviewed, Professor Barsash explained his findings.

Polygamy is reflected in both the male and female human biology. In fact, The Medical Daily reports that humans are part of only 3% of monogamous mammals. There are several factors that show this. Firstly, similar to other group-forming species, men are larger than women and more prone to violence. This is a classic trait found in male species who need to fight for the attention of many women. Men also tend to delay their love activity until they are large and strong in order to impress the female.

Polygyny adds competition to the male gender, due to their individual needs to have females to themselves. As one man takes several females, the male to female ratio gets distorted, thus leaving fewer females for other males. This makes monogamy a great democratizing practice. While some men may think they would excel in a world where they could have multiple female partners, the opposite is true. If only a few men have harems, polygyny would cause many men to be excluded. This would result in $e*ually frustrated men. In other species, however, this encourages strength among the males to be the best.

For women, however, polyandry is subtle, but evidence shows that unlike chimps, humans hide their ovulation. This concealed ovulation allowed our female ancestors to have multiple love partners while they were ovulating, rather than being guarded by one partner during fertile days.

Essentially, monogamy is not a natural biological phenomenon, even though there are many good reasons to practice it. Monogamy gives men confidence about their paternity. This is especially useful because men would not otherwise know if they fathered a child. This is also useful for our species because human infants are not autonomous and need the care of both parents.

One possibility, according to Professor Barsash, is that monogamy naturally developed among the male species to create social peace. Powerful men would give weaker men the chance to have a life partner to lessen the competition in the world.

RELATED ARTICE: 12 Factors That are Detrimental to Your Relationship More Than Cheating

Despite the fact that monogamy is generally accepted, males and females view relationships differently. While men react more to visual stimuli and are less discriminating than women, women show more interest in the personality of their partner and their behavioral inclinations rather than their physical traits. Men are more inclined to have a short-term relationship, while women tend to stay in relationships for a longer period of time.

While these differences between males and females are not completely rigid, social expectations show that the basic differences between males and females is universal across cultures. These differences are not only seen in hetero$exual relationships. They are also true in homo$exual relationships. Homo$exual men are more likely to have multiple partners, while homo$exual women are more likely to stick with one partner at a time. Female relationships tend to be deeper, therefore keeping females from straying.

So, should humans fight their urge to be monogamous? Just because this may be the natural thing for mammals to do, does not make it in our best interest. It is healthy to understand the urge of polygamous tendencies, as to not be shocked by your own feelings or the feelings of your partner.

While females are known to get mad at males who stray from a monogamous relationship, it should be generally known that the tendency is embedded in biology. This is not to say that it should be acted upon, but the thoughts and feelings that go along with polygamy are natural.