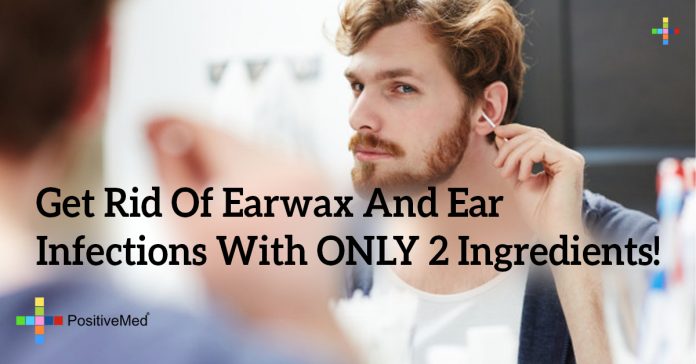 Get Rid Of Earwax And Ear Infections With ONLY 2 Ingredients!

Earwax—Natural Protection. Earwax (aka cerumen) is produced by sebaceous and apocrine sweat glands located in the external third of the ear canal. Sebum comprised of fatty acids and perspiration combine to make cerumen. Cerumen “migrates” from point of origin to the external ear where it is extruded. This migration enables the ear canal to cleanse itself of old skin cells, hair follicle debris, environmental dust, etc.

Cerumen production varies by individual and from ear to ear in a given person. The output may be affected by medications, emotional condition, and the environment. Being acidic in nature, cerumen suppresses fungi and bacteria. It’s a lubrication quality maintains canal tissues and discourages skin cracking. Imbedded hair follicle debris discourages insect penetration as wax carries entrapped matter to the ear canal opening.

Earwax Plugs and Ear Canal Occlusion. Cerumen impaction occurs when the ear canal is blocked denying cerumen and debris an exit from the canal. Hearing aid users may experience periodic occlusion caused by an earmold inhibiting wax extrusion. Some people, uncomfortable with cerumen in the canal, attempt to remove it with a swab or probe. These attempts may push the naturally-occurring earwax secretion deeper into the ear. They may plug up the canal by piling the wax up within. Additionally, the individual may scratch the canal’s skin canal wall, opening the ear canal up to potential infection. As a naturally occurring event, earwax exits the normal ear canal without any intervention on a person’s part.

Occlusion Symptoms. Symptoms of earwax plugging are varied and include such things as a sense of fullness, dull aching in the ear, ringing or buzzing in the ear, hearing loss, dizziness or balance issues, etc. To know whether the problem is related to wax in the canal or to other issues deeper in the ear, the canal needs to be visualized and assessed for wax accumulation by a physician. Your doctor can remove the wax with instruments, flush the ear, or manage other contributing issues, e.g., drainage from the middle ear through a tympanic membrane rupture, etc.

Earwax Removal—“Should I or Shouldn’t I?” For recurring wax problems found in healthy ears, impacted cerumen sufferers may seek to try their own home remedy. People who live in dry, dusty areas may have to deal with earwax removal when the dust component of the wax impedes natural wax extrusion. People, who have been pushing wax deeply into their ears with cotton swabs over the years, may have to deal with the canal occlusion resulting from their inappropriate attempts at removal. Hearing aid users with chronic occlusion problems may have to deal with this issue. Others who are not bothered by earwax should probably not “look for a problem when there is none.”

Earwax—Folk Remedy with History of Success. A variety of home remedies have been used over the years for cerumen management, some potentially dangerous (e.g., ear “candling”) and some readily available over the counter at a local drug store. A home remedy that works for many relies on making a mixture of half rubbing alcohol and half white vinegar, placing the mixture into a rubber bulb irrigation syringe, and lavaging the ear canal. Depending on the extent of canal occlusion, the process may be repeated several times to soften and remove the impacted material.