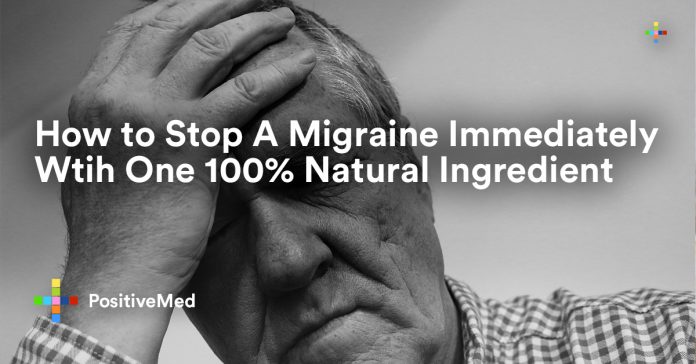 Migraines are throbbing headaches that come back again and again, typically affecting one side of the head. They often come with nausea and at times, your vision can be disrupted by them. Different than typical headaches, migraines are intense, causing severe pain and are usually accompanied by additional symptoms, including sensitivity to light or sound, pain behind one eye or ear and seeing spots or flashing lights. There are some natural remedies to stop a migraine depending on the cause of the migraine. One of the more popular remedies spreading on Facebook is to stop a migraine with Himalayan salt. Before talking about this remedy you need to know this works for some people and does not work for some others. Here is a useful explanation excerpted from Migraine.com:

So does salt stop a migraine?

If the migraine attack is due to an electrolyte imbalance caused by dehydration, then adding salt and/or sugar to water will probably help if you catch it in time. It’s roughly the same as the first intervention most of us receive at the ER. Dehydration may be the trigger, but once the migraine attack is in the process, it’s difficult to abort the attack with just a little salt water.

If the attack was triggered by dehydration AND other triggers (over-heating, exposure to allergens, chemicals, fumes, eating a triggering food, etc.), then salt may help, but you will likely require additional treatments (abortive medicine) to stop the attack.

If the attack was triggered by something other than dehydration, then adding salt water will not stop the attack. Other treatments will likely be necessary.

Himalayan crystal salt is far more superior to traditional iodized salt. Himalayan salt has been in existence for many years; it is different from other ocean salts because it is unpolluted and free from toxins. In Himalaya, it is also referred to as” white gold”, and contains the 84 natural minerals of the 118 known by scientists. The salt can store energy in vibrational form due to its unique cellular structure. Minerals found in this salt can be absorbed into our bodies because they are tiny. This type of salt has been forming under the ocean for over 250 million years where there is intense tectonic pressure; this environment has no pollutants or toxins.

The health benefits of Himalayan Salt

According to Dr Edward Group DC, Himalayan salt has many health benefits they are,

• Controls water levels within the body and enables them to function well
• Stabilizing PH balance in the cells.
• Aiding in reducing the common signs of aging
• Helps food to be absorbed easily in the intestinal tract.
• Regulating blood sugar levels
• Aids in vascular health
• Supporting healthy respiratory function
• Lowering incidence of a sinus problem, and promoting overall sinus health

MORE ABOUT SINUS INFECTION: How To Clear Your Sinuses With Your Tongue In 20 Seconds And Cure Sinus Infection Naturally

How to use the salt

According to dailynutritionalnews.com, if you decide to use salt to use salt to relieve pain caused by a migraine there are some basic things you should know:

• It is the best because of its rich composition of minerals, elements, and electrolytes.
• Himalayan salt contains 84 of the 118 mineral elements known to science.
• The salt reduces the intensity of pain making our immune system strong. It does this by giving balance to the production of the hormone called serotonin, which also results in an increased energy level.
• The salt increases the presence of alkaline and electrolytes in our bodies keeping things in balance.

The process of using the salt for headache is pretty straightforward:

As with every salt, you have to watch your sodium intake. Himalayan salt might be the best for you, but it also contains sodium. Make sure you don’t take a lot of Himalayan salts because it is a primary source of sodium. Sodium causes water retention, and excessive consumption can result in different health problems, heart disease and high blood pressure is the most common.