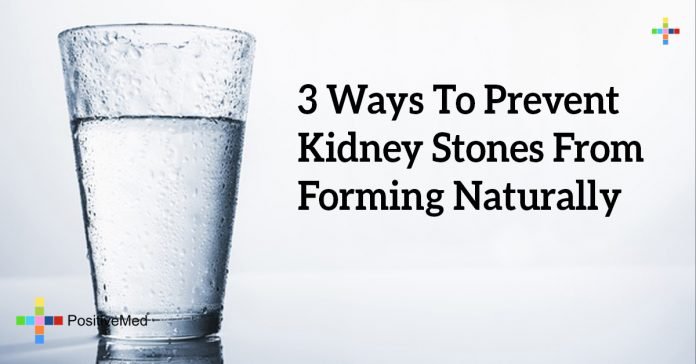 Few pains are said to be as painful, if not more so, than giving birth, with the one exception being: the pain suffered by people under a kidney stone attack. Also known medically as renal lithiasis, about 10 to 15 percent of the adult population in the U.S. can have one of these excruciating experiences during a lifetime. Worse yet, having had one of these episodes of kidney stones, repeat bouts do happen at later times.

The good news is that it’s actually simple to prevent having them in the first place. Having no counter-indications and using a three-prong strategy consisting of the following factors, people can hope to safely navigate around such a painful event. Actually, all it takes is making lifestyle changes from what has been the norm before.

Perhaps the leading preventive measure one can take, other than hydration, is keeping a healthy diet. One leading 1999 South African study disclosed that soda, as found in pop drinks, exacerbates the formation of calcium kidney stone conditions.

Consuming diets high in processed salt are other culprits of kidney stone predisposition. Overuse of salt also leads to hypertension that in many cases, is another precursor to kidney disease, in addition to kidney stones.

RELATED ARTICLE: 13 Warning Signs You’ll Get Kidney Stones In The Future And How To Prevent Them

Avoiding as much caffeine-rich beverages as possible, along with staying clear of non fermented soy drink products, is another way to prevent the formation and buildup of kidney stones.

Curiously, recent studies indicate that while calcium-rich natural foods are beneficial for their calcium contents, calcium supplements can increase the risk of kidney stones by a full 20 percent, according to the Annuals of Internal Medicine, March 1997.

As far as reducing one’s protein intake as found in meats, there’s a trend today suggesting that this only applies if one finds himself in a full-blown kidney crisis and not as a preventive measure against kidney stones.

Although 90 to 95 percent of the kidney stones typically pass within a few days without any intervention whatsoever, by drinking adequate amounts of water, good old H2O, you can avoid ever having kidney stones at all.

Generally, your urine appears as a light, yellow color under most conditions. However, depending on what you drink, eat and even take as supplements or medications, this color varies from time to time. Keeping a watch on urine is a good tip-off that something unpleasant is up if it turns a brownish color.

Today’s sedentary lifestyle, as found in almost all of western culture, sets the stage for kidney stone problems. As such, it’s vitally important to get enough exercise that maintains your body’s fluids flowing easily and keeps those kidney stones from forming.

As simple as preventing kidney stones is, few people take time to research the consequences of not eating the right foods such as fruit and vegetables. Even fewer study the foods that naturally can give them the nutrients commonly found in foods-such as potassium in bananas and citrate as found in lemons.

That being said, when life gives you lemons, make some lemo.