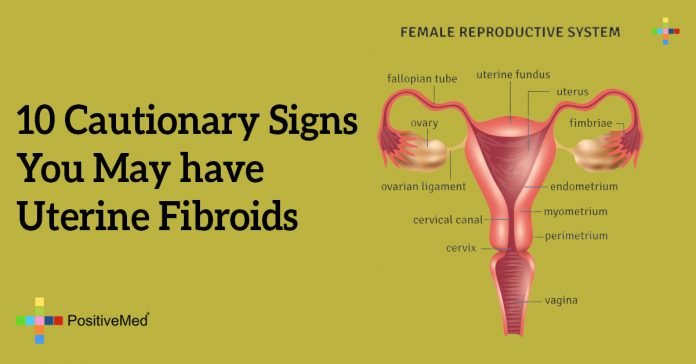 10 Cautionary Signs You May have Uterine Fibroids

Uterine fibroids are very common, causing symptoms in about 25 percent of women. Fibroids are benign, or noncancerous, tumors that grow in the walls of the uterus. It’s not understood why fibroids develop, but scientists and doctors believe that genetics may play a role.

There are several factors that put women at a greater risk for developing fibroids. These factors include:

Age: Most women who get fibroids are between the ages 18 and 45. In African-Americans, fibroids are often found at an earlier age. After menopause, fibroids typically shrink.

Nulliparity: Women who have never been pregnant, or haven’t carried a pregnancy past 20 weeks, are at a higher risk of developing the growths.

Family History: Women with family members that have had fibroids are at an increased likelihood of developing them. Some research shows that if a woman’s mother had fibroids, she is three times as likely to develop them.

Ethnic Origin: African-American women are more likely to develop fibroids than women of other ethnic groups.

Weight: Women who are overweight are at a high risk for developing the growths. For very obese women, the likelihood of fibroids is two to three times greater.

Just because a risk factor is present, doesn’t mean that a woman will develop fibroids. Most women who are diagnosed with fibroids, however, do have one of the following 10 symptoms.

Women with fibroids may have very heavy bleeding during their menstrual periods or may bleed in-between cycles. This bleeding can be heavy enough to cause anemia in some women.

Fibroids are one of the leading causes of infertility. This is because fibroids can cause an obstruction in the Fallopian tubes, which prevents the fertilized egg from descending into the uterus and implanting.

Fibroids that take up too much space in the cavity of the uterus can prevent a fetus from developing properly, resulting in the loss of the pregnancy.

4. Swelling or a Mass in the Lower Abdomen

Large fibroids can grow large enough that they may be palpable from the outside of the lower abdomen.

The growth can put pressure on the bladder, causing urination to be more frequent and painful.

Fibroids can also put pressure on the rectum, compressing it and making it difficult for a woman to have normal bowel movements.

This is a common symptom that occurs when the fibroids press on the nerves and muscles in the back. It generally starts out as a dull aching pain that doesn’t go away. The pain may increase as the fibroids grow.

Though a more rare sign, leg swelling can occur in fibroids when the lymphatic tissue becomes compressed, preventing fluid from moving properly.

When the pelvic veins become compressed by large fibroids, it can result in varicose veins forming in the legs.

Large fibroids that are located in the lower part of the uterus can cause making love uncomfortable and painful.

Fibroids can be extremely bothersome when left untreated. If you suspect you have fibroids, seeking help from a medical professional can help you get the relief you need.