PositiveMed The Positive Side of Medicine
Home health cancer 11 Foods You probably Eating Everyday Without Knowing that they Can Cause Cancer! 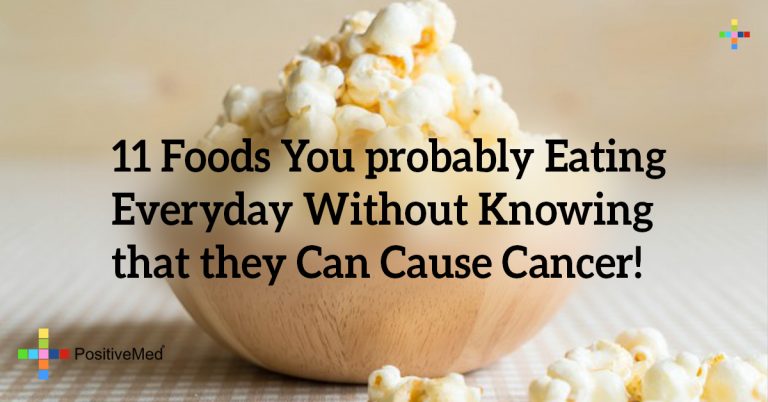 11 Foods You probably Eating Everyday Without Knowing that they Can Cause Cancer!

Much of the food stocked in grocery stores are processed with chemicals and pesticides. Many of these ingredients have harmful effects on the body and greatly increases the risk of cancer. Here are 11 of the most common offenders you probably eat everyday.

Processed meats contain a toxic mixture of salts, chemicals and preservatives. Among the processed meats to avoid are:
sausages
hot dogs
bacon
bologna

Aside from containing high levels of fat and calories, potato chips contain a high level of preservatives and a carcinogen known as acrylamide (most commonly found in cigarettes). Acrylamide is an agent used to create the crisp texture of the chips.(2)

Processed white flour gains its color and texture from its toxic bleaching process with chlorine gas. A scientific study revealed that regular consumption of refined carbohydrates was linked to 220 percent increase in breast cancer among women.

Microwaveable popcorn bags are lined with perfluorooctanoic acid (PFOA), a toxin commonly found in Teflon and linked to infertility in women. Microwaveable popcorn itself contains a chemical called diacetyl, linked to cases of lung diseases diagnosed in popcorn factory workers. The popcorn has also been linked to pancreatic, testicular and liver cancer.

Soft drinks contain harmful ingredients and disproportionate amounts of sugar. The sugar is rapidly digested and can lead to inflammation and insulin resistance. Soda also contains derivative 4-methylimidazole (4-MI), a cancer causing chemical that creates a caramel colored hue in the drink.

Canned foods containers are lined with a BPA-resin which may seep into food. Exposure to BPA has been linked to developmental defects in fetuses and infants.(3) Canned tomatoes are especially susceptible to BPA due to their high acidity, which can break down BPA for the tomatoes to absorb.

Most foods that are advertised as “diet”, “low calorie” and “low fat” are highly processed and laced with chemicals that are used to remove the fat and sugar. Many of these additives, such as aspartame, have been linked to cancer, heart problems and birth defects.

Farm raised fish are fed unnatural diets that are filled with chemicals, antibiotics, pesticides and various carcinogens. Their signature reddish tint is caused by their chemical feed.

Excessive consumption of alcohol can increase the risk of several cancers, including breast, mouth, esophageal, liver, colon and rectal cancer.

While moderate consumption of red meat is fine, excessive amounts can lead to higher risks of colon and rectal cancer.

Lower your risk of disease and cancer by avoiding the harmful foods on this list. Whole, organic produce and USDA organic meat will reduce your exposure to chemicals and pesticides.