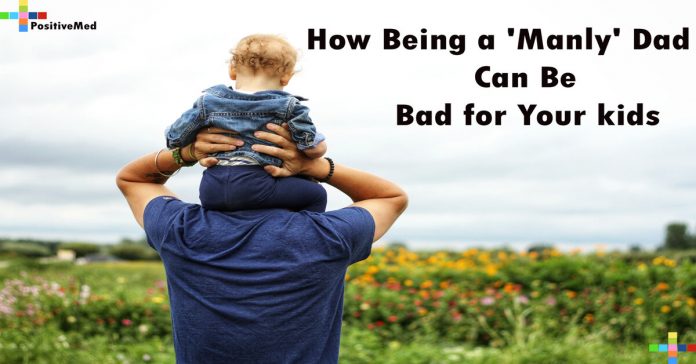 For most fathers who have grown up with expectations about what constitutes being manly, fatherhood can present a host of problems. Men in today’s world sometimes feel that expressing emotions or saying “I love you” to their family members can denote weakness. They may fear that their words will lack authority if they are open about their feelings. But being a “manly dad” often affects children in ways that are difficult to predict.

Learning by Example
When kids grow up with the belief that expressing emotions is somehow wrong, they can experience many difficulties later in life. Business and personal relationships in this day and age are increasingly based around setting healthy boundaries and using clear communication skills, and kids who cannot communicate well with others will often find themselves at a disadvantage when they grow older. Whether used at work or in a marriage, poor communication skills learned at an early age can have long-lasting consequences.

Minding the Generation Gap
For many people, the problem of what constitutes being manly lies in generational notions of masculinity. After World War II, the “strong, silent type” of person was seen as the ideal “manly man”; John Wayne and James Bond were heroes to millions. Many people born in the decades after World War II had fathers who had served in the military, where stern discipline took the place of encouragement and unconditional love.

Men were supposed to bottle up their feelings and “get on with it,” the thinking went, and despite many societal changes, the idea of the “manly dad” who never reveals his true feelings is often still with us in some form or another. Playing up to the role of a good provider, many men rarely see their families in order to put in more time at the office. And when we believe ourselves to be only as good as our income or our career prospects, the family will always come second to career needs.

Lessons About Authority
Regardless of how well-intentioned a parent might be, children often mistake the “strong, silent type” of father for a distant authoritarian. They grow up believing that authority figures are there to restrict their freedoms rather than to guide them. Under the tutelage of this type of father, children learn that their emotions are not important.

They may imagine that it is normal to bottle up their feelings until they reach a breaking point, at which time their emotions emerge in a destructive flood. They may even enter into codependent relationships, believing that the well-being of others is far more important than their own. Their career may suffer as they put their needs aside to be the perfect man, or they may distance themselves from close family members in order to cope with unhealthy relationships.

The Downsides of Being Manly
Other children may react to being raised in a strict household by hiding any behaviors that they believe will earn them criticism from a domineering parent. Such children learn that not getting caught is preferable to receiving negative feedback about problematic behavior. They may find in later life that their marriages fail due to their propensity for keeping secrets from their spouses. Manly, though they may appear to some, inside they struggle with feelings of disappointment for not managing their negative emotions.

To this end, it is important that fathers understand that being a “manly man” can have serious downsides for children. If we want our family to feel comfortable approaching us about a problem, or if we want them to be able to communicate well in their careers and marriages, we must set an example now. Being honest about our emotions is no weakness; it takes bravery and self-sacrifice to open up to others and to our family. And that is just the example we need to set!