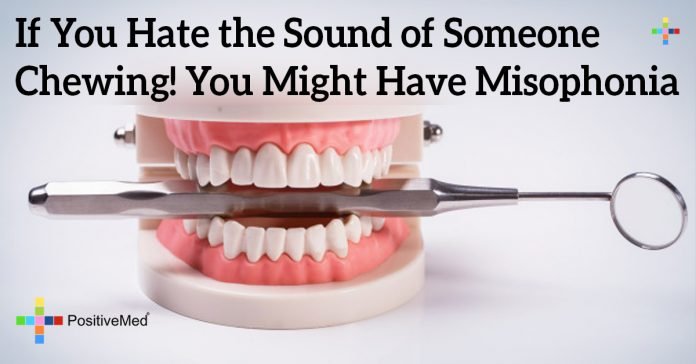 If You Hate the Sound of Someone Chewing! You Might Have Misophonia

We’ve all been asked some form of the question “what’s eating you?” But if what is eating you is in fact the sound of your partner chewing his or her food from across the table, you may actually have a disorder called misophonia. The word misophonia literally means “hatred of sound.”

Recently this medical phenomenon has been brought to public attention by starts such as Kelly Ripa, who has vehemently expressed on her daily show how the sound of her husband’s chewing makes her want to scream. While misophonia can be expressed in the hatred of any sound, bodily sounds like slurping, chewing, gulping, and other repetitive sounds are the most common offenders.

The exact number of people suffering from misophonia is unknown, but it is estimated to be between 5 and 10 percent of the population. A recent study conducted at the University of South Florida found nearly 20% of its participants showed misophonia symptoms. Diagnostic criteria for the disorder was created by psychiatirsts at the Academic Medical Center in Amsterdam. While the sounds that induce anxiety or anger differ among sufferers of misophonia, some symptoms remain the same. These symptoms generally center around the response that a trigger sound induces. Those with mild misophonia may feel anxious or uncomfortable when they hear a trigger sound (such as cheweing).

They may feel a strong urge to leave the situation or feel disgust toward the person making the sound. Those with more severe misophonia feel much stronger emotions when they hear a trigger sound. These emotions include rage, anger, hatred, and even sometimes a desire to kill the person making the sound. Though most do not follow through on these emotions, experiencing these sorts of intense feelings can be very distressing. The actual cause of misophonia is unknown, but some believe it to be a neural connection between the sound and emotional pathways in the brain.

If you’re suffering from misophonia, there are some steps that you can take to alleviate your symptoms naturally.