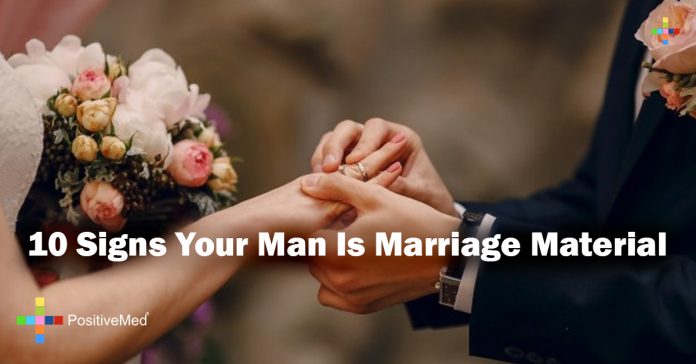 10 Signs Your Man Is Marriage Material

Many of us begin thinking about marriage after we’ve been in a relationship for a while, especially if we’re still in love with who we’re with. Sometimes, though, we’re blinded by that love and don’t see the signals that say this particular person is not ready to marry, and sometimes we don’t see problems until the relationship has developed into something serious. So you’re both on par with intensity about religion and politics, you’re both pretty good at personal finances and are able to drive, if you wish to. What else?

1 – He likes your special brand of crazy– A guy who’s going to make it in the long run will stick around, even when you’re a bitchy mess or totally irrational. He knows he can be a big pain in the butt, too. You’ve seen each other at your worst and understand each other on a level most people don’t.

2 – He knows about and indulges your guilty pleasures– This is the kind of guy who will go out of his way to do something nice for you. Like that time he bought 32 chocolate oranges from eBay so you’d never be without them, or after a long day at work came home with tickets to that thing you like (that he patently doesn’t) but took you to and sat through it without falling asleep or complaining about anything but the parking.

4 – He’s passionate and enjoys similar things as you– Remember that time you stayed up until four in the morning playing Spite and Malice, then had to go to work early the next day but it was totally worth it? Or when you both took time off work to go hiking in the national park? Having things in common is what is going to keep you happy together, having separate interests is what’s going to keep it interesting.

5 – He fights fair– Is he mature and able to communicate what he wants? Think about past conversations you’ve had, especially the fights. Does he play fair or does he do a lot of name calling and fit throwing, or does he simply disappear until he’s ready to work things through? How you communicate, especially arguments, has a lot of clues about your future together. Marriage only works if both partners argue cohesively and communicate well to one another. If he fights immaturely, it’s not a good time to marry. That isn’t to say that one day he won’t be, but right now he definitely isn’t.

6 – He brags about you– He talks you up to his friends, family, colleagues, whatever because he thinks you’re fantastic and talented and beautiful and everyone should know about it.

7 – He does that thing that you like… in bed– You know what I’m talking about. You casually mentioned one time that you liked that, and he became an expert at it? That’s because he wants you to have as much fun as he is – and he’s having a great time.

8 – He’s not the jealous type and isn’t afraid to go the extra mile to make you laugh– He’s definitely husband material when he behaves in a totally goofy way and you love it. Or that inside joke you guys have and he throws out randomly, just to see you smile. He trusts you to be faithful, even when you were so totally ogling that waiter’s behind.

9 – He has a life of his own and respects that you do too– You guys aren’t attached at the hip and there isn’t a crisis because you want to go snowboarding with some colleagues or he started doing yoga (he brought you along, at first, but it wasn’t really your thing). You have your own things, the best part being that you get to talk about them when you get home.

10 – He’s giving, willing, and game for anything with you, no matter how off-the-wall it seems or terrifying– Yes, he’ll go bungee jumping (even though he’s terrified of heights) or to the Mets game (even though he’s a Yankees fan). He’ll do that thing you read about on the internet, that’ll probably end-up in a mess as well as strained ligaments for at least one of you. Yes, he’ll go to the corn maze and Halloween spectacular at the local amusement park. Why not?

Sometimes, even when you’re so frustrated or angry you feel like pulling out your hair or screaming, you remember one of these things and are suddenly calmed by an immense feeling of love. Because at the end of the day, sometimes you just know when something’s right.