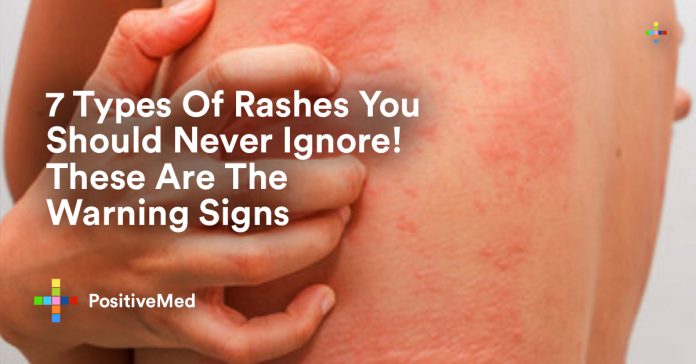 What do bed bugs, tick bites and mosquito bites all have in common? For the most part, they all leave some types of rashes of some kind that shouldn’t be ignored.

With the latest outbreak of Lyme disease and other forms of diseases, it is vitally important for people, and parents especially, to pay close attention to what may seem like a slow-starting rash that eventually turns into a full-blown life-threatening situation and possible fatality.  As reported by the Center for Disease Control (CDC) there are now more than 14 different diseases alone that are transmitted to humans by infected ticks.

However, our article below deals with the seven most common rashes that are easily observable yet shouldn’t be ignored. If they are non-infectious, the chances are good that they can be treated with natural remedies or over-the-counter medications.

Although not in itself a worm, it actually is a fungus living off dead skin, hair and tissue surrounding the nails. Starting off red and scaly, it then turns into a red, itchy ring with raised, blistery or scaly borders. Ringworm is generally treated with antifungal creams.

Thankfully, not as common today because of Chicken Pox vaccinations, this is nevertheless one serious disease. Advancing in stages, this disease first blisters, bursts, dries and finally crusts over the body leaving an itchy rash with blisters over the body.

This bacteria-caused disease is known for its red sores or blisters. Breaking open and oozing, impetigo develops into a yellow-brown crust. Showing up anywhere over the body, marks are more predominant around the mouth and nose area. Usually spread through direct skin contact or sharing things like towels, toys or sports gear, impetigo requires the use of antibiotic ointment.

Generally endured by most of us at some time or other, this rash develops generally from blocked sweat ducts. Typically, heat rashes appear first as tiny red or pink pimples on the head, neck and shoulder areas. Removing excess of clothing and applying cold compresses to the affected rash area is the indicated treatment here.

Usually developing after contact with plants or certain foods, detergents or soaps, this rash starts within 48 hours after first skin contact. Symptoms are a mild redness or a rash of small red bumps. Usually, this form of rash goes away after two weeks and is treated with 1 percent hydro-cortisone or another anti-inflammatory cream.

Caused by the reactivation of a dormant childhood Chicken Pox virus, shingles alternate between being painful and itchy. Many times, nerve symptoms of pain, itching, burning or tingling appear before the actual rash manifests. Forming an unsightly rash, its blisters turn into a reddish scab.

Usually, it may form around the torso area of the body, but it has been known to respect no area of the body. This is one rebellious skin rash to treat, usually by vaccines and medication; however, some people get it in a mild enough form to not even warrant medication.

Not wanting to appear overly concerned or a hypochondriac, what skin rash, if any, have you observed recently that may need attention by a physician?