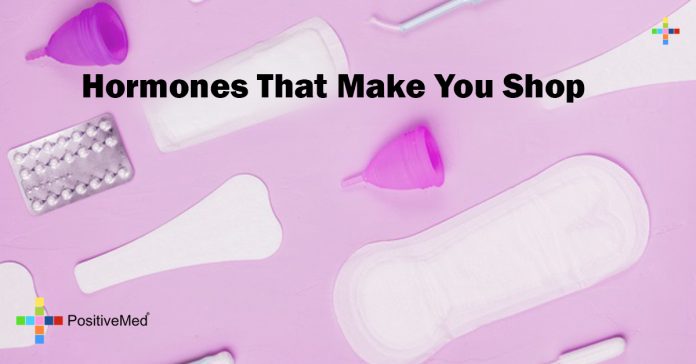 Hormones That Make You Shop

When a woman has the sudden urge to shop, or her single-item trip to the clothing store turns into a full-blown shopping spree, she may not know what “got into her.” Actually, it’s evolution, and it rears its ugly head during ovulation. It isn’t an irrational action…it’s science.

Many women do not know that the menstrual cycle is more than just a countdown to the dreaded “time of the month.” Here’s the lowdown:

The first (and worst!) day of the menstrual cycle is the start of the period. It can last from three to seven very long days.
When the period portion of the menstrual cycle ends, the body begins preparing for ovulation. The body starts producing follicle-stimulating hormone; meanwhile, it produces ever-increasing amounts of estrogen.
Finally, ovulation begins. It is marked by the body’s sudden increase in luteinising hormones, and the final release of the mature egg.
After ovulation, the mature egg is either fertilized, or it “dies.” The body starts producing progesterone hormones, premenstrual syndrome symptoms emerge, and the body prepares yet again for another cycle (unless, of course, the cycle ends in pregnancy!).

Now that the ovulation part of the menstrual cycle is clear, the link between ovulation and increased shopping habits can be explored.

In the “early days,” women engaged in “mating-related activities” at a level much higher than in non-ovulation times. This is because a woman is the most fertile during ovulation, so she subconsciously tries to attract and keep a masculine male.

Recent studies have shown that women act more provocatively when they are ovulating than during other phases of the menstrual cycle. An ovulating woman is also more likely to flirt with a man who has masculine features, such as a chiseled jaw line and a deep voice. She is also more provocative in the way that she carries herself; an ovulating woman will sashay her hips a little more and dress more promiscuously than she might normally dress.

What Does Shopping Have to Do With It?

Scientists are discovering that ovulating women are no longer just subconsciously acting out in primitive, evolutionary ways. They are behaving in a very 21st-century manner: increased shopping habits.

Researchers believe that an increase in shopping is linked to an increase in estrogen production. Increased shopping habits are a modern-day extension of primitive mating urges; ovulating women not only shop more than they normally would, but also buy clothing that is more revealing and more sexually appealing.

This all ties back to an ovulating woman’s need to “outdo” the competition. An ovulating woman is more attuned to her appearance and sexual desirability. She is also more aware of her status when in the presence of other women.

An ovulating woman should not feel guilty when the sudden urge to shop arises. Yet, if she is in tune with her menstrual cycle, she can plan ahead and hide the credit cards before the urge turns into reality.