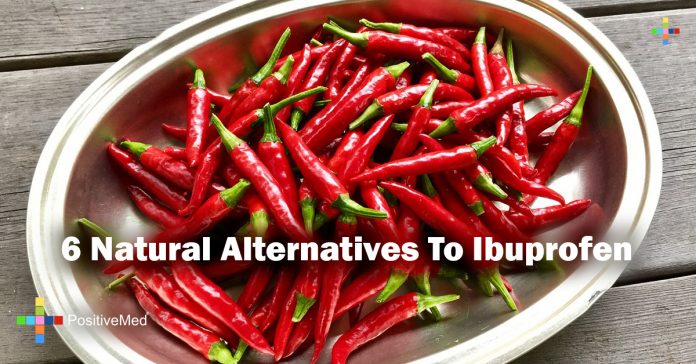 Pain is constantly looming presence in the modern, industrialized world. Even when it’s fairly mild, it can interfere with daily life. Unfortunately, responsibilities won’t wait just because you’re in pain. For this reason, many people resort to taking non-steroidal anti-inflammatory drugs (NSAIDs) like ibuprofen. Unfortunately, like most man-made quick fixes, it can have some dire consequences. Ibuprofen is well-known to increase the risk of ulcers and gastrointestinal bleeding, and may also cause:

These effects are a heavy price to pay for quick relief. However, Mother Nature has seen fit to provide us with very powerful safe and natural alternatives to toxic NSAIDs like ibuprofen.

Cayenne peppers are one of nature’s most useful healing substances. They’re spicy due to an active component of chili peppers, known as capsaicin, which is why it makes them such an effective pain killer. When you hurt, your body is releasing a neuropeptide called Substance P that transmits pain signals to your brain. Capsaicin blocks the action of Substance P, bringing you relief.

Turmeric has been one of the biggest stars of natural medicine for thousands of years. Its action is very similar to that of capsaicin because it, too, prevents substance P from reaching the brain. However, it is also known as a powerful anti-inflammatory due to its ability to inhibit specific inflammation-promoting proteins.

Ginger is a common spice good for more than making sweets. It also has considerable medical value in the treatment of pain. Ginger is strongly anti-inflammatory and analgesic, and it contains numerous anti-oxidant compounds that act against pain on a cellular level. It has been recommended for everything from headaches to menstrual cramps, and research now shows that it’s highly effective against arthritis pain, too.

The use of willow bark for pain relief dates back more than 2,000 years. Today, it is much less widely used, but it can still be found in health food stores. Willow bark contains salicin, the active substance that inspired the development of aspirin. Willow bark doesn’t act as quickly as aspirin, but it may last longer and present fewer risks.

Eugenol is a chemical found naturally in basil, cloves, nutmeg, cinnamon and bay leaf. It’s most commonly recommended for tooth pain, but it can help with other kinds of pain, too. Eugenol is an inhibitor of the COX-2 enzyme, which triggers the inflammatory process. When inflammation occurs, it tends to press against nerve endings, resulting in pain. Taking eugenol-containing herbs or using essential oils that contain it can help fight this pain and inflammation.

Fish, cod liver, chia, hemp and flax oils can provide a reliable defense against pain, especially for people struggling with arthritis, neck and back pain. The omega-3 fatty acids contained in these oils breaks down a pro-inflammatory hormones called prostaglandin. In studies, omega-3 was found to cut NSAID use by one-third for arthritis patients, and two-thirds of people with neck and back pain were able to stop NSAID use entirely.

Mother Nature has provided humanity with everything we need to survive and be healthy, which can be easy to forget these days. Instead, we tend to be too reliant on man-made medicines that do more harm than good. The next time you’re in pain, skip the ibuprofen and reach of one of these natural alternatives instead.