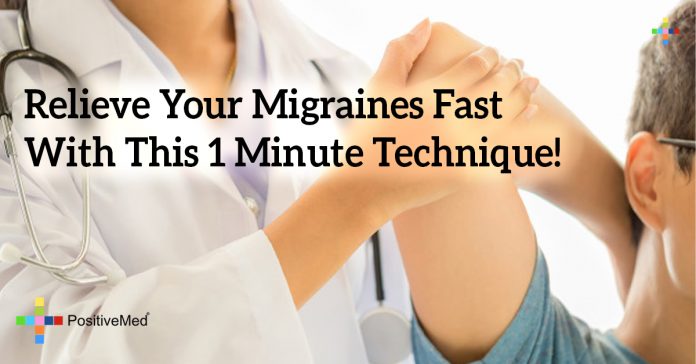 Relieve Your Migraines Fast With This 1 Minute Technique!

As such, migraine headaches are characterized by an intense throbbing in one area of the head. In more severe bouts, they are accompanied by nausea, vomiting, appearing auras and marked sensitivity to light and sound. In contrast, tension headaches afflict a full 90 percent of the population and have few, if any, accompanying symptoms.

Difficult to treat by conventional medical science, now come massage techniques that aid in relieving the migraine depending on where it is located: at the skull’s base; the temple or sides of the head; behind the eye or both eyes; or the forehead. Especially prevalent in women over 50, one of their main causes may be attributed to hormonal changes in some women in their pre-menopausal or post-menopausal phases.

Now under more serious examination are manual therapies used such as chiropractic manipulation and physical therapy for reducing the frequency of migraines. Some studies indicate that massage therapies are even more effective than acupuncture.

Following are some examples of the various manipulative massaged used by some health practitioners:

– One exercise is for pain at the base of the skull and is administered with the person lying face down.

– Other exercises are for the temple area and are administered with the person lying face up.

– Yet another exercise is for behind the eyes when due to sinus troubles. This can be done by applying pressure on the cheeks close to the nose and then releasing the pressure several times.

– Forehead massages are primarily done by a gentle thumb action on the forehead in pulling in an upward motion.

Whatever technique is being used, caution should be exercised by an experienced person when applying the technique. That being said, do you suffer from migraines, and if so, how often and how do you best deal with them?