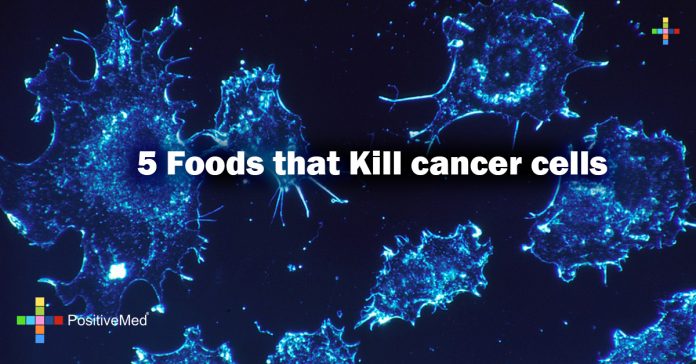 Many people don’t know, or severely underestimate, how powerful the body is at healing itself, if left to its own devices with the right nutrition. Here is what you need to know, every day thousands of cancerous cells are formed in our body and are killed by different processes in the body, this process is called apoptosis. Due to several factors some cancerous cells might skip being destroyed, multiply instead, and become a tumor. There are foods can help your body become stronger in this fight against cancer cells, but you have to eat these foods regularly. Here is the list of 5 foods that kill cancer cells:

There is minimal need for drugs to fight any disease when you have a strong and healthy body. It has been proved that foods suppress tumor development during immune surveillance, the immune system’s process of patrolling the body for cancer cells.

There is a molecule known as TIC10, which activates a protein that helps fight the disease, by suppressing tumor development it can actually cross the blood-brain barrier, which separates the main circulatory system from the brain.

1. Turmeric
Curcumin has countless benefits, thanks to its powerful antioxidants it outperforms many pharmaceuticals in its effects against several chronic, debilitating diseases. No side effects.

2. Grapes and Resveratrol
Resveratrol is not only an antioxidant and anti-mutagen, but also reduces oxidant-caused cell death. Resveratrol is found in grapes and has been shown to reduce the occurrence of cancers and pre-cancerous growths.

3. Green tea
Catechin is the plant flanovoid that makes green tea filled with benefits, it blocks TNF naturally by interfering with the ability of pro-inflammatory chemicals to bind cells of smooth muscle tissue of the vascular system.

4. Tomatoes
Among the many components that make tomatoes so good for you, carotenoids and lycopene are the most interesting since they were found to block production of inflammatory mediators.

5. Raw fruits and veggies
Raw fruits and vegetables provide anti-inflammatory benefits, they lower markers for inflammation, including C-reactive protein (CRP), interleukin-6 (IL-6), and tumor necrosis factor-alpha (TNF-alpha), capable of cutting growth of colon cancer cells both in vitro and in rats by 50%-100%.