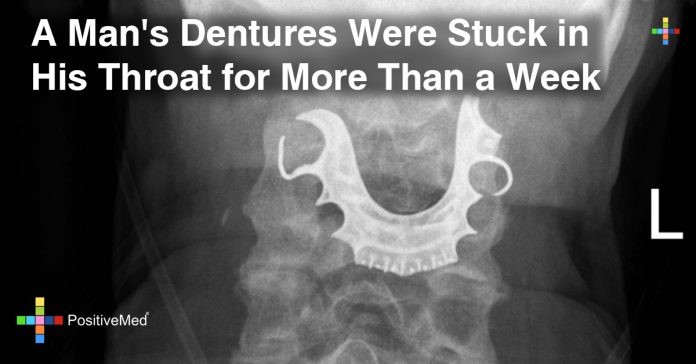 It’s the kind of frightening story that puts a lump in your throat just reading it. There is definitely good sense about not wearing dentures during any surgery. The scenario proved to be true for an elderly patient when his teeth somehow got stuck in his throat. The U.K. resident complained to his physician post-surgery that couldn’t swallow solid food. He headed to the emergency room, and finally, the incident started to make sense.

The 72-year-old man, a retired electrician, had gone in for abdominal surgery, said a report in LiveScience. The operation would remove a minor lump in the wall tissue.

He wore the false teeth during the surgery. In the United Kingdom, there are no set guidelines on dentures worn during operations. The patient was resting comfortably following the surgery. However, he could not locate his false teeth. He thought the teeth had been misplaced somewhere. It is not known why the teeth were not removed before his operation.

Six days later at home, the man started experiencing throat pain. He could not swallow his medication or eat solid food. He started spitting up blood, so he returned to the ER. Doctors examined him but found nothing, and a chest x-ray revealed the same. The hospital sent the patient home again with antibiotics for a possible side effect from the surgery intubation.

Two days later, the man went back to the ER, and this time, he was admitted. Doctors believed that he may have contracted pneumonia. The elderly man was also having trouble breathing.

A report in The Washington Post revealed that doctors were somewhat baffled. Then, another test was taken using a special camera attached to a thin tube. The tube was inserted through his nose and down his throat.

There it was! Something was blocking the man’s epiglottis. That is the flap of skin that stops food from entering the windpipe and lungs.

The false teeth were wedged there, and another x-ray confirmed it. The patient has immediately whisked away to the operating room for surgery. Doctors were able to remove the teeth with the aid of some forceps.

One would think that would have been the end of it, and the poor gentleman could recover. However, that was not the case. The patient kept coughing up a lot of blood. In fact, it was reported that he lost about three pints.

He was back in the hospital, and doctors discovered the issue. The patient had developed a spurting arterial vessel in his throat. The problem was not found during the surgery to pluck out the dentures stuck in his throat.

The good news is that the British gentleman is now recovering nicely at home. His harrowing story was not the first. All over the globe, many patients have worn their false teeth during surgery. Sometimes, the teeth are inhaled or swallowed during an operation. In the United States, a patient’s false teeth and jewelry, too, are removed before general anesthesia.