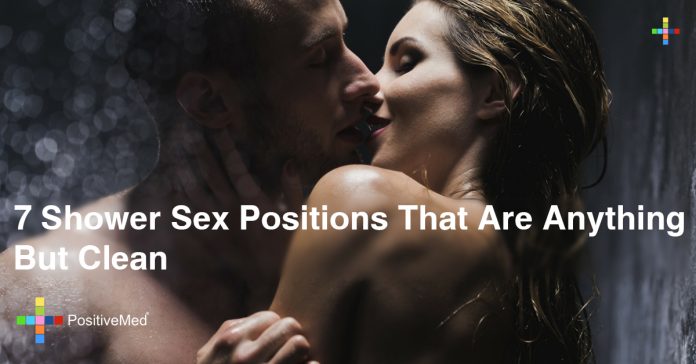 Thinking about trying shower sex to keep things fresh? That could be great but remember that trying all the Kama Sutra sex positions in a slippery shower could be dangerous. So to help keep you out of the emergency room but still keep things exciting in your love life, here are seven shower sex positions that are anything but “clean.”

Seated Sex
The seated sex position is good for both the tub or shower. Facing the same direction, the man sits on the floor and the woman sits in his lap. This is one of the sex positions that are especially good for women because it actually allows the lady to control depth, rhythm, and speed.

Tall X
In the Tall X position, the woman faces the wall and stands with her arms and legs spread wide to form a big “X.” The man gets right behind the woman. He enters her from this standing position. A shower mat is suggested for all standing shower sex positions.

Standing Doggy
This is a variation of the Tall X standing position. The woman faces away from her partner, bends at the waist and leans against the wall. The man stands behind her entering from behind. His hands are free to reach under and forward to caress and stimulate her clitoris, breasts or even anus.

Oral Shower Sex
Oral shower sex can also be an exceptional choice for sex in the shower or even shower sex foreplay. All it takes is the natural lubrication from both of your mouths. Take turns sitting on the shower seat or the edge of your tub while you kneel and pleasure each other with your mouths and tongues.

Leg Lift
In this standing position, you stand face-to-face pressed against each other. The man lifts the woman’s leg thus allowing easier entry. In this position, you only have three feet on the shower floor. The man leans against the wall or the woman rests her foot on the tub’s edge as if she was shaving her legs.

The Proposal
Here the man takes a knee before the standing woman as if he is going to propose. The woman kneels closely to the man so that he can penetrate her. It’s also a great option if the man has a large penis too because the angle of entry with this position helps to avoid the discomfort sometimes caused by a well-endowed man.

Shower sex can be great if you do it right. Just remember to choose your sex positions carefully. Steady yourself with the floor wall or a shower mat so you’ll feel the love and not the pain.