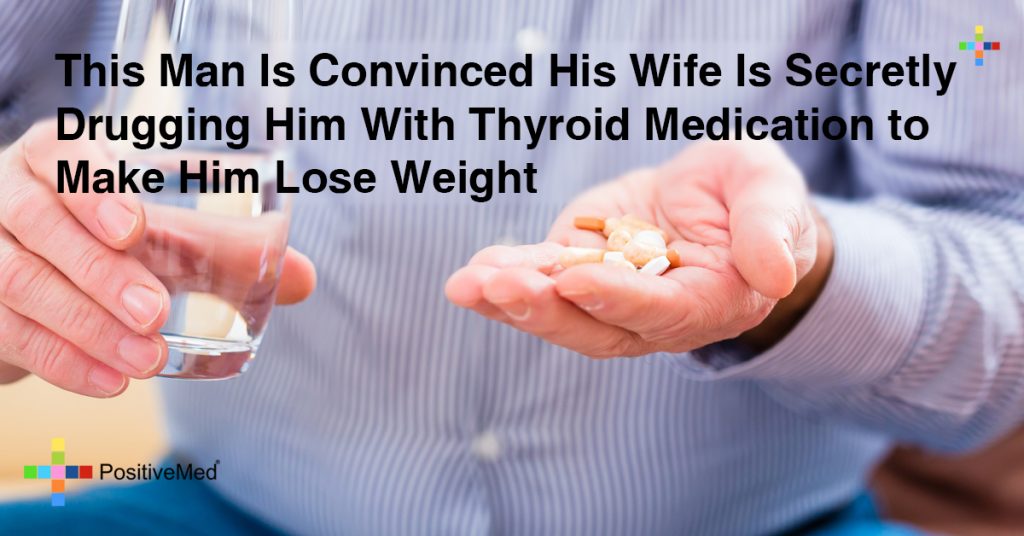 A man on Reddit has gone viral after discovering that his wife was drugging him in a forced attempt to lose weight.

“I am fat,” he told his fellow Redditors. “Always have been. My spouse has been mentioning it more and more in the last few years.”

He continued with a story that’s probably familiar to anyone who has struggled with their weight. He exercised; he tried various diets; he even experimented with fasting. Nothing worked, and he remained at 6’0″ and 245 pounds.

His wife suggested that he might have a thyroid issue. Hypothyroidism can cause weight gain when the body doesn’t produce enough of the thyroid hormone. The man disagreed with her diagnosis, and they fought about it.

Flash forward to the couple going on a vegan diet together. The wife helpfully prepared green smoothies for the man to drink every morning. She also warned him that vegan diets could cause side effects like fevers, headaches, joint pains, insomnia, and diarrhea.

The man experienced all of these symptoms within five hours.

“Now, I’m not a doctor,” he told Reddit. “But [the] side effects of changing your diet should take weeks [or] months to show up, no?”

He became even more suspicious when he rummaged through a kitchen cupboard and found a bottle of pills labeled “Euthyrox.” It was a thyroid medication, and it had exactly five pills missing. He’d been experiencing symptoms for five days.

He confronted his wife about the potential drugging, but she denied it. He asked the people of Reddit for advice. When answering comments from concerned users, he revealed that his wife was a licensed kidney doctor with the ability to write prescriptions.

“You’re getting drugged,” one user bluntly told him.

“The bells and alarms and red flags are all present here!” cautioned another.

One user expressed fear for the man’s future health.

“If this is seriously the case, and you don’t have hypothyroidism, she could put you into atrial fibrillation,” they warned. Atrial fibrillation is an irregular heart rate that can lead to strokes, blood clots, and heart failure.

After hearing from everyone on Reddit, the man admitted to feeling a bit panicked. He decided to confront his wife again, and their second argument was even worse than the first. In an update, he told Reddit that he’d finally had enough and told his wife to get out. She returned to her parent’s house.

He summarized the situation at the end of the post: “Gonna get a divorce.”

In the month since he originally shared his story, the man’s tale of woe has gone viral. It’s been covered by multiple blogs and news outlets, and Health magazine even called on a registered dietician to confirm that the man’s symptoms were unlikely to be caused by a vegan diet.

It’s crazy to think that there are people out there who are willing to drug their spouses to make them lose weight, but as this man has demonstrated, the truth can be even stranger than fiction.