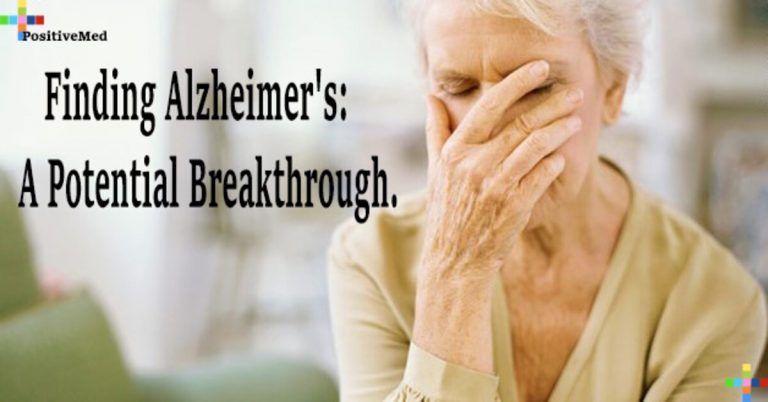 Dementia is a serious problem in the elderly population; an estimated fourteen percent of people older than 70 have some form of dementia and this number increases to almost 40% of those over age 90. Although most people immediately think of Alzheimer disease when they hear the word “dementia”, there are actually many different causes of dementia, some of which, like vitamin B deficiencies, are readily treatable. Currently, identifying patients who are in the early stages of Alzheimer’s versus those suffering from other conditions like vascular dementia is impossible, which hinders the application of appropriate treatments. However, recently, a study reported an exciting new Alzheimers breakthrough that can diagnose the condition very early, possibly allowing it to be treated effectively.

The Alzheimers breakthrough
The initial symptoms of all forms of dementia are the same: problems with memory, confusion, and minor cognitive impairment. Distinguishing the various types of dementia without performing an autopsy can be very difficult. Blood tests can identify vitamin deficiencies and images of the brain can sometimes reveal vascular problems that may be causing dementia. Thus, the diagnosis of Alzheimer’s is generally one of exclusion, aka other obvious causes have been ruled out.

What causes Alzheimer’s?
The cause of this disease is currently unknown. It is a progressive neurodegenerative disease where neurons in the brain die off. It can be distinguished on autopsy by the presence of tangles of a protein called beta-amyloid throughout the brain. It is one of the leading causes of death in the United States, ranking sixth. The cost of caring for individuals suffering from Alzheimer’s is immense, close to $290 billion dollars per year.

What treatments are available?
Although there is currently no cure, there are a number of FDA approved medications available that can slow down the progression of the disease. These medications generally only work when taken during the early phases of the disease, which is why it is so important to be able to diagnosis the condition in its early phases. During the early phases of Alzheimer’s, various cholinesterase inhibitors are prescribed. Although it is not clear how they work, they seem fairly effective in improving memory and slowing down the progression of the disease. However, these medications stop working as the disease progresses. During the middle phase of the disease, several drugs that regulate glutamate in the brain can be prescribed to help control symptoms.

Conclusion
In conclusion, this exciting breakthrough in diagnosing Alzheimer’s during its early phases may enable patients to begin treatment as soon as possible, in order to achieve maximal effectiveness from the available treatments.