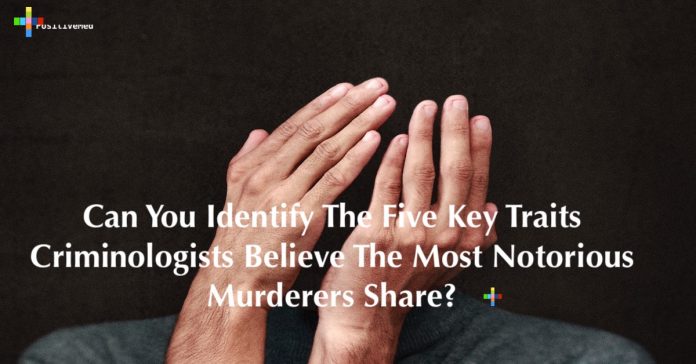 Can you identify the five key traits criminologists believe the most notorious murderers display? No, they don’t share specific health conditions, such as lactose intolerance or Crohn’s Disease. Yet many leading criminologists do maintain they exhibit a tell-tale combination of distinctive personality and physiological properties. Read this brief article to discover current research findings of this disturbing topic.

The Scope of The Problem

Notorious murderers have caused suffering in virtually every society and era. This problem still exists in the modern world. From the United States to Russia to China to Australia, reports of gruesome serial killings upset the public.

Some experts estimate around 2,000 of these criminals remain at liberty today. This statistic translates into a significant criminal justice burden. Serial killers murder at least two people. Some, such as British physician Harold Shipman (1946-2004) take hundreds of innocent lives.

Reportedly, criminologists have recently identified five traits shared by most serial killers. These qualities merge personality and physiological data. People who never murder others also sometimes display some of these traits, too. Many criminologists believe serial killers usually exhibit all of these characteristics:

Most people at some point in life meet someone on an “ego trip”. Reportedly, serial killers crave a sense of power. They may break established norms of behavior during social interactions to assert their own will over others. Sometimes they won’t share crucial information simply in order to bolster their own authority.

Serial killers also seek to manipulate the people around them. They lie with impunity. This effort to control the behavior of others sometimes involves creating a false public image. A serial killer may masquerade as a respected member of the community. Murderer John Wayne Gacy entertained children as a clown in public. In secret, he killed 33 young men.

One especially unfortunate characteristic of serial killers involves a superficially charming personality. Ted Bundy, who viciously killed over 30 people, reportedly struck many casual acquaintances as an engaging, charming man. He used his charisma to mislead some of his victims into trusting him.

Perhaps not surprisingly, criminologists associate serial killing with brain damage. Many notorious murderers sustained head injuries or brain damage at some point. Some researchers believe the limbic system and hypothalamus problems may contribute to a loss of impulse control in serial killers.

The Benefits of Early Intervention

Identifying the traits displayed by serial killers remains more difficult than detecting lactose intolerance or Crohn’s Disease. Perhaps in the future, experts will succeed in assisting at-risk individuals. Possibly they will develop effective strategies for preventing serial killer behavior? This advance might save lives and promote a much kinder world!