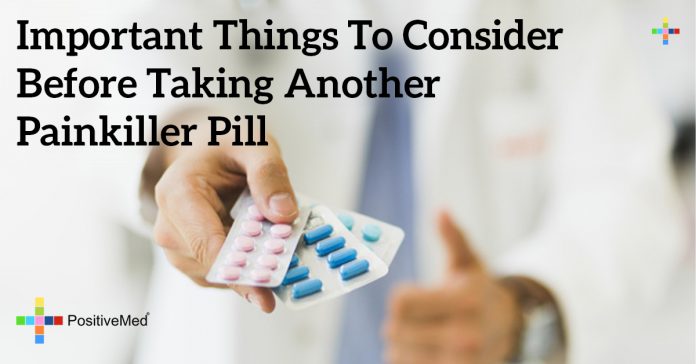 Important Things to Consider Before Taking Another Painkiller Pill

Many medical experts agree that one of the most concerning trends in the modern medical system is the tendency to over use pain medication. Though pain pills can be extremely beneficial for specific conditions, constantly taking high amounts of pain medication can be very bad for your health. A lot of over the counter pain medications might seem harmless, but they can have potentially life threatening consequences. Almost everyone has occasionally decided to swallow another pain pill after the first one does not work, but this habit is quite harmful in the long run.

A study by the American Gastroenterological Association has revealed that almost half of all chronic pain sufferers regularly ignore dosage suggestions. When people are feeling pain, they tend to end up taking high amounts of over the counter pain medications in a fruitless attempt to make the discomfort stop. Though desperately wanting pain to stop is understandable, this is actually quite ineffective, and the side effects may be deadly.

RELATED ARTICLE: 5 Over The Counter Pills You Should Never Put In Your Mouth Again

Instead of dulling pain, swallowing several pain pills instead results in an overdose. Depending on the type of pain pill a person has overdosed on, they may experience ulcers, liver damage, or bleeding stomach linings. Sometimes, these overdosing symptoms may cause death, especially if a person gets liver damage from taking too many pain medications. Unfortunately, people often do not realize that they are overdosing because the early warning signs are just nausea and stomach pains, which many people are already experiencing if they want pain pills in the first place.

RELATED ARTICLE: THIS 26-YEAR-OLD BRIDE-TO-BE HAD A BRAIN STROKE BECAUSE OF HER BIRTH CONTROL PILLS

Most painkillers can be divided into two broad categories, which have different effects during an overdose. Acetaminophen overdoses can cause acute liver failure, which is responsible for roughly 450 deaths in the United States each year. It can also greatly damage the kidneys. Chronically using acetaminophen also raises liver enzymes over time, causing liver damage. Non-steroidal anti-inflammatory drugs (NSAIDs) primarily harm the gastrointestinal system, causing ulcers and other issues. However, they have also been linked to heart attacks and kidney damage in a 2011 study.

A lot of people also run into trouble because they assume that an over the counter drug is safe to take with most other medications. However, many brand name medications actually contain the same ingredients. Therefore, if you take some Tylenol and then later take Nyquil, you are actually just taking a double dosage of acetaminophen. The same issue occurs if a person takes an Advil, assumes that the Advil is not working, and later takes a Motrin. Both of these are NSAIDs, so they can combine to cause health issues. Some drugs can also interact with other drugs. For example, taking an acetaminophen painkiller after a hangover can quickly cause liver failure because the previously consumed alcohol has already overtaxed the liver.

Even if you have been taking double doses or mixing over the counter pain relievers for years, you could still suddenly experience an overdose. Many people assume that they will not be harmed by doing something that has not hurt them in the past, but this is not true when it comes to pain reliever overdoses. Doctors emphasize that it is crucial for patients to only take the recommended amount on the pain reliever package unless their doctor has told them otherwise.

The best thing you can do to avoid the harmful side effects of painkillers is be well informed. Many people take over the counter medications without actually knowing what their active ingredients and recommended dosages are. Therefore, it is very important to read the package and instructions that come with the medication in order to be properly informed. If you continue to suffer from chronic pain, it is safer to talk to your doctor about a new pain management routine instead of just swallowing handfuls of over the counter pain relievers.
[/nextpage]