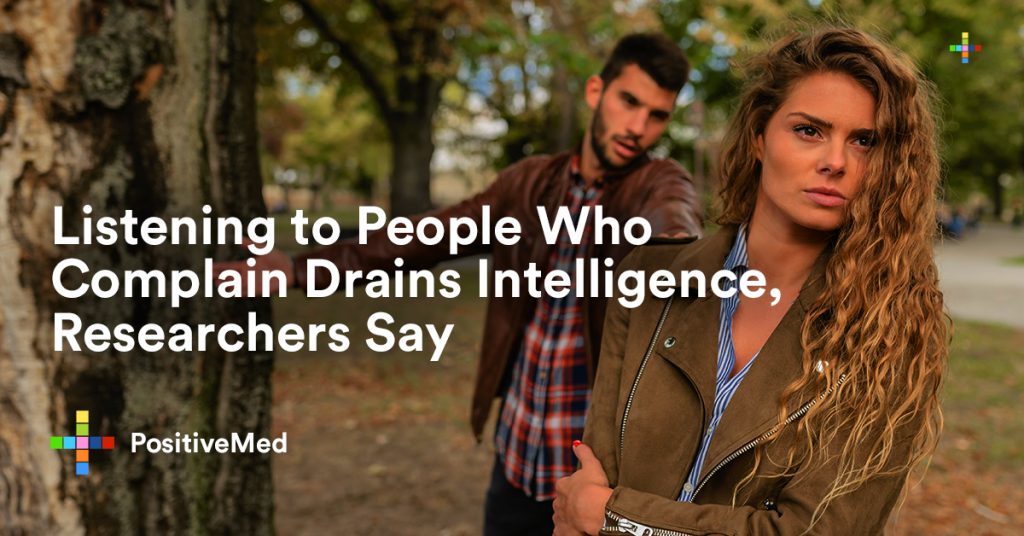 Sticking in negativity can seriously ruin your mental and physical well being. Most people complain in an attempt to torture others with their negativity. Indulging in a bit of moan is an attempt to get our emotions out so that we can feel better.

However, science indicates that there are a few serious flaws if we reason that way. First, expressing negativity tends to make us feel better but it makes the listeners feel worse. In reference to psychologist Jeffery Lohr, venting anger sounds a good idea but it is comparable to emotional farting in an enclosed area.

Negativity is bad for you and your friends, and at the same time, it can be very bad for your brain and health.

Psychologist Steven Parton, an author, and student of human nature says that complaining alters your brain for the worse and has serious repercussions for your mental well being. He further explains that complaining can literally kill someone. Here are three ways how complaining harms your health:

The brain consists of a collection of synapses that are connected by an empty space known as synaptic cleft. When having a thought, one synapse sends a chemical through cleft to another synapse, thus creating a bridge through which an electric signal crosses carrying its charge and the relevant information you are thinking about. Every time this electrical charge is triggered, the synapses get close to each other to reduce the distance the electrical charge has to cross.  The brain rewires its own circuitry, that causes physical changes itself, to allow proper synapses to share the chemical link to make it easier for the thought to trigger.

2. Your thoughts influence your character

3. Stress is bad for your body

According to Parton, keeping away from negativity is good for mental health, but quitting the complaining habit is essential for your physical health as well. When your brain is firing synapses of anger, it is a blow to your immune health. It increases your blood pressure which can lead to diabetes, heart disease, and obesity, according to Parton. The stress hormone level increases when you are negative. Increased levels of this hormone can interfere with memory and learning, lower your immune function, increase weight gain, cholesterol, and heart disease.

How To Cope with People that Drain You

There are different ways through which you can cope with people who suck your valuable time and energy to fuel their relentless negativity. Such people are all around us and can leave you unhappy, exhausted and drained. Without effective strategies to deal with them, they can make your life miserable.

Energy vampires are mostly personality-disordered individuals with the following characteristics:

• They are intrusive and show poor boundaries
• They are overly dramatic and tend to exaggerate things
• They are overly critical and find fault with nearly everyone and everything
• They always complain and hardly find anything they like or meet their satisfaction
• They like arguing and hardly agree with other people on small issues
• They are persistent and demanding, and hardly take no for an answer
• They are always negative
• They don’t accept responsibilities and blame everyone for their problems and actions.

You are not supposed to let their problems become yours.

The following steps can help you cope with people who drain you:

1. Identify them when you meet them

It can be quite challenging to identify an energy vampire when you come across one for the first time. Their quirkiness can be intriguing and their gossip or stories can leave you demanding for more. Some have a dramatic flair that can be entertaining but their hard luck stories can leave you exhausted. However, you may soon realize that something is not right. Such feelings should not be ignored. You should pay close attention to your instincts and physical reactions after meeting such people. If you experience symptoms like muscle pain, low energy, headache, sadness, irritability, confusion, or negativity, there is an energy vampire in your life.

2. Avoid them if you can

Once you spot such a person, you should try to avoid him or her as much as you can. If there is no way to avoid them like in the case of a co-worker or family member, set rigid limits. For instance, if someone is overly intrusive or dramatic, always start off your conversation to let them know that you only have a few minutes to talk with him/her. Once you are done with them, disengage in a polite way.

3. Avoid getting pulled in

Regardless of how you feel like you are capable of helping such people with their problems, you simply can’t. People who are chronically negative tend to avoid your interventions and may create new problems for you to fix. The fact is that professional therapists have a difficult time with personality-disordered people. In other words, their problems are beyond your strength to repair. The best way is to set firm and clear limits. For instance, resist offering solutions to people who are constantly needy or feel insecure. However, you should not be rude. Try to be firm, kind, and empathetic.

In recent times, energy is a very precious commodity. It’s not something to be given away freely to the negative power of those people who steal your power. Instead, maintain a positive attitude and surround yourself with positive people who leave you energized.