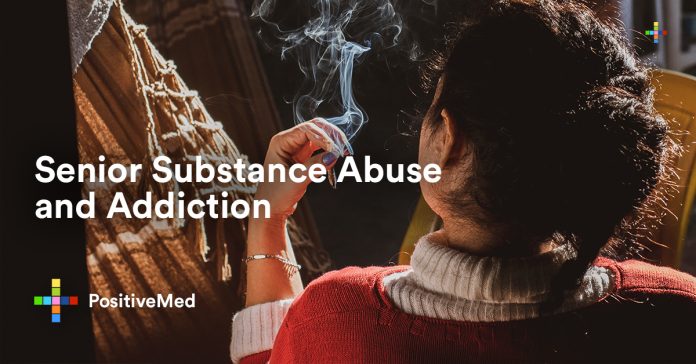 There are approximately 50 million individuals 65 and older living in the United States, with those numbers projected to hit nearly 85 million by 2050, according to the U.S. Census Bureau. The majority of these older adults are part of the baby boomer generation (born between the years 1946 and 1964). The increase in the older adult population brings many new challenges – insurance coverage, retirement, cost of living, and also substance abuse.

When we normally think of substance abuse – including both alcohol and drug addictions, we don’t typically think of adults over the age of 65. However, based on recent statistics, maybe we should start. When it comes to substance abuse, the substance most often abused is alcohol (with estimates of up to 6 million older adults – aged 65 and older – projected to suffer from alcohol addiction by 2020). Illicit drug use has doubled among older adults from 2002 to 2013. But, the most prominent substance abuse issue among the elderly is associated with prescription medications. The Gerontological Society of America reported that there was a 78% increase in emergency room visits due to prescription medication misuse and/or abuse among the elderly between 2006 and 2012.

In general, the amount of prescriptions written for opioids and benzodiazepines has increased exponentially, not only among the older generation, but among all age levels. Turn on the news and you’re likely to hear reports on the opioid epidemic we are experiencing – leading to substantial increases in drug addictions, drug overdoses, and admittance to rehab programs. Though much of this attention to the opioid epidemic is on the younger to middle-age population; older adults fall into the shadows. With over a quarter of all prescription drugs sold to the older population – and 11% of that population falling victim to prescription drug abuse, it’s time to start taking note.

How Does Addiction Occur?

Is the increase in narcotic painkillers and anti-anxiety or sedative prescriptions the only reason for the uptick in seniors with substance abuse problems? Not necessarily. Though, it’s a major factor. Older adults experience many life events that can also lead to substance abuse problems – retirement, death of friends and family members, being short on money but out of the workforce, experiencing social isolation, and becoming less active. These issues are unique to the older population – at least more so than their younger counterparts.

Couple these issues with the use of prescription drugs, and it can be easy for addiction problems to occur. It’s not uncommon for older adults to take one or many prescription medications for chronic pain or other medical needs. And when stronger pain meds are scripted for chronic pain, addiction can settle in within five days. Oftentimes addiction is missed among the elderly because side effects and symptoms of addiction can be similar with common signs of aging in general.

Other reasons substance abuse and drug addiction can occur frequently and much more quickly is because of the body chemistry of the older population. Physiological and physical changes can make the older population more susceptible to drug abuse and addiction. As metabolism slows down and reaction times decrease, prescription medications and alcohol can have a more serious effect on the body – and alter how the substances are broken down in the body. More seriously, the interaction between both prescription medications and alcohol can be profoundly enhanced among the older population should they be taken at the same time.

Because the older population is not on doctors’ radars as being addicts as much as the younger populations, prescriptions might be written more freely and more frequently. And sometimes, incorrectly. Opioid narcotics are usually meant to treat moderate to severe (acute) pain, but oftentimes they are prescribed to the elderly to treat chronic conditions. As the older population continues to take the drug over a long period of time, tolerance may be built up so they require more of the medication to achieve the desired effects. They continue to take the medication because if they stop taking it for a few days, they start to feel lousy again. What’s interesting is that they may not be feeling bad because of the actual underlying (pain) condition, rather, they are experiencing the effects of drug withdrawal, and when they start taking the drug again, those negative side effects diminish.

As stated above, many times substance abuse in the elderly is misdiagnosed, or not diagnosed at all, because the signs and symptoms of addiction are similar to aging in general. Additionally, an increase in mental illnesses among the elderly (e.g., depression and anxiety) might also mask some of the signs and symptoms of drug addiction. The Psychiatric Times reports that substance abuse and mental illness co-occur at rates up to 66% in older adults.

Doctors are more likely to over-prescribe medications to seniors as well, allowing for the potential ease of abuse by creating an overabundance of medications available at their fingertips. For example, if a 70-year old individual has minor dental surgery – a doctor may prescribe at least a month’s worth of prescription narcotic painkillers when the patient may have only need one week’s worth of pills at most. If the same person goes to the doctor the next month for a minor outpatient surgery and is prescribed more narcotic painkillers, the patient could have a two-month supply at his/her fingertips with two short day visits to the doctor. Many individuals in younger populations get their hands on prescription drugs and other illicit drugs through “doctor shopping” – going from doctor to doctor to try to get prescriptions written for them. When it comes to the older population, doctor shopping isn’t as necessary, because most doctors will easily write more prescriptions for the elderly population, without questioning the potential for substance abuse as much as if the patient were younger. According to the National Institute on Drug Abuse (NIDA), older adults may be the population we should be looking out for the most, considering they are more likely to take more medications for longer rates, or take multiple long-term medications that are known for possible addiction.

Sometimes in the older population, the withdrawal effects of the drug might be the first cue that an addiction problem is occurring. Some of the most common withdrawal symptoms of drug addiction include:

As you can see from these lists, many older adults may experience similar signs and symptoms based on other medical issues or mental illnesses, so it can be hard to tease apart drug addiction from other types of medical conditions among the elderly.

Treatment and Recovery Programs for Seniors

If you discover that a loved one is suffering from drug addiction or substance abuse, what can you do to help? Older adults who have an addiction problem should seek medical treatment for recovery. Because this issue among the elderly population is becoming more prevalent in today’s society, more and more rehab and treatment centers are focusing on older adults. Age-specific treatment programs can be beneficial to the older population over a more general population within a rehab and treatment facility, as the counseling and therapy can be focused on age-specific causes and triggers that affect the more senior population.

Treatment programs for seniors who are affected by substance abuse and drug addiction follow a similar course of action to other rehab and treatment programs. The first step in the treatment process is medical detox to wean the individual off of the drug under medical supervision. This should be done over a period of time (not stopping cold turkey) and should be done under medical supervision – especially for older adults – to monitor vitals and body reactions to the detox. In addition, doctors may be able to prescribe some medications that counter some of the negative effects of detox to make the individual feel more comfortable.

After detox, individuals may enter into either inpatient or outpatient rehab programs. Inpatient programs are those where the individual will stay on treatment center grounds – with most programs lasting a month. In this time, the individuals will undergo counseling, therapy, and preventative, education, and support services to steer them back to a life free from drug addiction.

After rehab treatment and recovery programs have been completed, it’s important that the elderly individual stay engaged in continued care – either through self-help or 12-step programs. The Substance Abuse and Mental Health Services Administration (SAMHSA) also recommends that older adults who received treatment for addiction be assigned a case manager to check in with them periodically to assess how they are doing outside of treatment and to determine if any relapses have occurred.

Older adults who receive Medicare or other supplemental insurance should check their policies – as many of the treatment and recovery programs for substance abuse treatment and mental health treatment are covered under this federally funded insurance program.