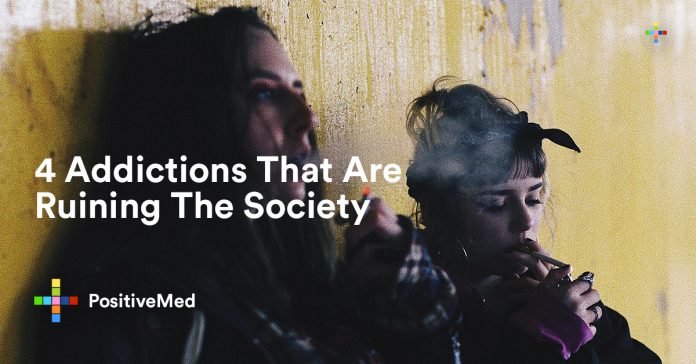 Addiction of all kinds is bad. People can get addicted to anything, from tea to movies to love. Let’s have a look at four such addictions and how they are ruining the society.

Alcohol is consumed almost all around the world despite its side effects.

Drinking becomes an addiction in no time as it affects our brain and we get used to it. Not getting our daily dose of alcohol can cause mood swings and other such issues.

Alcohol consumption is linked to an increase in crimes as well, which is why many government organizations are also pushing for responsible drinking. There are also several organizations like Addictiontosobriety to help addicts overcome their addiction.

Smoking is the number one cause of lung cancer that causes 30% of all cancer deaths. In fact, 87% of all deaths due to lung cancer are related to smoking, yet sadly the number of smokers is on a constant rise.

Smoking is all about nicotine that is found in tobacco, which slowly affects our brain and we get addicted to it. Smoking is not only common among adults but children or teenagers as well.

Smoking is said to be more dangerous than most other addictions because people who do not smoke can also get affected by nicotine. Research has proven the side effects of living in an environment where smoking is common. This is why pregnant women should stay away from smoking and those who smoke.

There are ways to quit smoking, including chewing specific gums. Some even suggest to turn to e-cigs that remove the side effects of nicotine, but you need to work ly hard to be able to give up on this addiction completely.

Marijuana was on the rise in the 80s and 90s when drug cartels took over the world, but with better control, its use was curbed to a great extent, but latest numbers show that its use is once again increasing.

Marijuana is currently used by over 55 million adults in the US. In fact, about 50% of the US population is said to have consumed marijuana at least once in their life. The figures are threatening especially with over 50% Americans believing that it is acceptable to smoke marijuana.

Related Link: Want to Quit Smoking? This Easy Cure Might Surprise You!

This is ly because marijuana is known as a recreational drug as it also provides several benefits, but an overdose can cause several issues including anxiety, heart problems, and even memory issues.

It does not take very long for one to get addicted to marijuana, which is why it is important to keep a tab on its use.

This may sound funny to some but you can get addicted to using computers. When we say this we mean activities that are performed on a computer, most importantly browsing the web and playing video games.

While browsing the web may not be considered an addiction yet, experts are pushing for it to be listed as an addiction given the amount of time people spend on the web and the effect it has on their brains.

Using the internet itself may not look like an addiction, but what happens to your brain when you are not able to use the web shows how horrible it can be.

Similarly, video games can be addictive as well. Most games are said to spend about 10 hours on gaming per week, but some can be spending 20+ hours, and this is when it gets bad.

You get addicted to a game and you just want to reach the next level. This can take a toll on your brain and distract you from performing other activities, including studies.

Surprisingly, video gaming is more common among adults than among children, and a large portion of video game addicts are men.