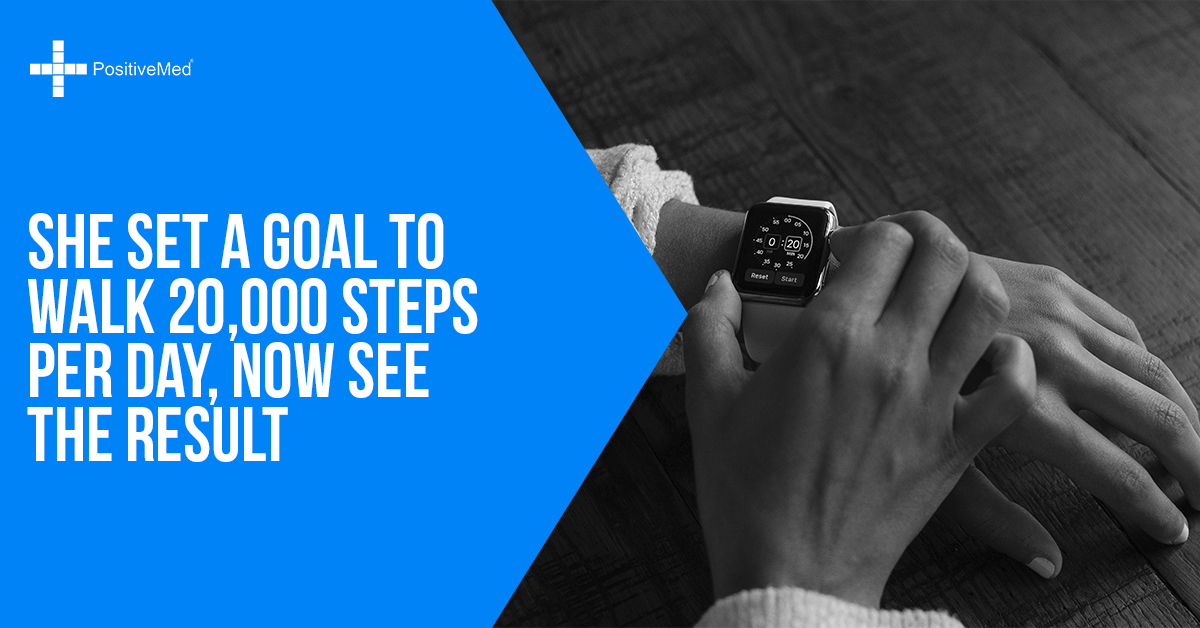 April Rueb, a resident of New York City, recently set a goal to get in 20,000 steps per day. She was already accomplishing 10,000 steps per day without really even trying. She lives 2.5 miles from her office, and walking is the most reliable form of transportation in the city with the added bonus that it is free.

However, she felt a little guilty that she was getting her 10,000 steps without putting forth any real effort. She had friends who didn’t walk to work who were also getting in 10,000 steps, and she decided that she would see what would happen if she doubled her daily steps. Here are five things that happened to Rueb when she started accomplishing 20,000 steps per day.

She Was Able to Accomplish More in Less Time

Rueb found that increasing her steps to 20,000 per day helped her concentrate more. Even though she spent more time walking outdoors and less time indoors, she found that she was getting more things done. In addition, she found that her energy levels shot up and her caffeine consumption plummeted down.

Although the 20,000 steps she accomplished daily increased her energy levels, they also exhausted her in a good way. At the end of the day, she found that she was able to fall asleep instantly. She found that she was going to bed earlier than usual and sleeping like a baby. She never had trouble falling asleep, which is something that she had experienced issues with in the past.

She Saw the Sun Rise

RELATED ARTICLE: Your Body On Walking! 10 Things That Happen To Your Body When You Walk

One of the greatest benefits for Rueb to getting in 20,000 steps a day was that she never had to wake up to her alarm clock. Because she was going to bed earlier than usual and getting such deep sleep, she found that she was able to get up every morning earlier than she needed to. She would wake up feeling completely refreshed and full of energy. This surprised her because she had never been a morning person. One of the best moments of the experience for her was when she woke up at 5 am, went for a run and saw the sunrise.

Rueb is one of those people who believe in the power of positivity. However, she finds that it is too easy for her to let one little negative experience send her spiraling down into full-blown negativity. She found that her 20,000-steps-per-day experience helped her to stay positive. She cited one example in particular where she was able to look on the bright side. She forgot to pick up the dry cleaning on a Sunday when she had run a bunch of errands. She at first started groaning, but then she realized that forgetting the dry cleaning gave her an opportunity to get in more steps. That instantly brightened her day and turned a negative into a positive.

She Found That It Was Easy

When she began the challenge, Rueb had worried that she would have to sacrifice other aspects of her life to complete the 20,000 steps each day. In fact, she found it easy to accomplish her goal every day. She just had to look for opportunities to get in extra steps in the course of her day. For example, she did things like marching in place while her lunch heated in the microwave, taking a longer route to the bathroom at work and doing an extra lap around the block while she was out running errands. She found that she did not have to sacrifice her social life to accomplish her goal.

If Rueb can get in 20,000 steps per day, you can surely do half of that. There has been loads of research done that shows that getting in 10,000 steps each day is very beneficial for your health. Get a fitness tracker or pedometer and start counting your steps today to enjoy more energy, better sleep, a positive attitude and better health.