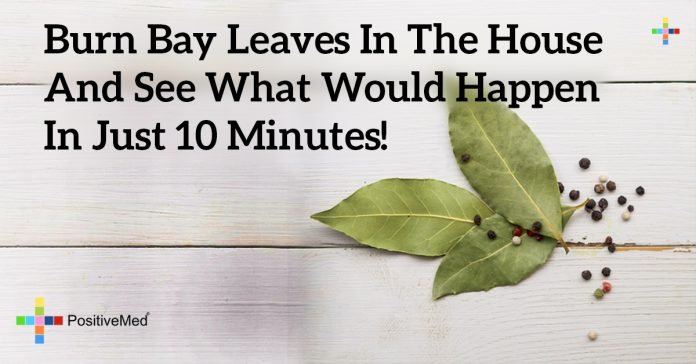 Burn Bay Leaves in the House and See What Would Happen in Just 10 Minutes!

It is considered to be “good luck” to find a bay leaf in your bowl when served a dish of soup or stew. But bay leaves are treasured for many different reasons and have been valued in cultures around the world for centuries. The soothing effect of the essential oil of bay leaves can help to reduce anxiety and have been used to relieve respiratory inflammation, such as bronchitis, especially when the leaves are burned properly.

RELATED ARTICLE: A Specific Supplement That Reduces Anxiety and Stress

Bay leaves are also full of vitamins such as vitamin A, C, and B-complex which contribute to overall health as well as healing and having anti-carcinogenic effects.

Infusions of bay leaf parts have been used to assist in the soothing of stomach ulcers as well as the relief of colic pain and, ahem, flatulence.

They can be used as natural insect repellants, and have been used in the treatment of arthritis, muscle pain, and symptoms associated with the flu.

It is little wonder that the majestic bay leaf has long been one of the most treasured herbs worldwide, even to the point of earning a spot on the head of Olympic champions in ancient Greece in the form of laurel wreaths.

Why not chew, cook, or burn some bay leaves for yourself and feel the soothing and healing effects of this humble, but mighty leaf.