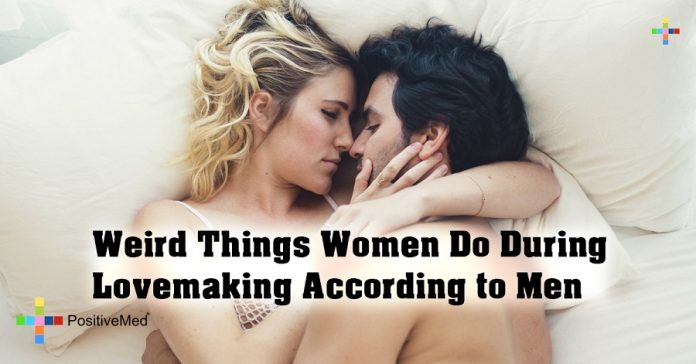 Weird Things Women Do During Lovemaking According to Men

Sometimes lovemaking can be mind-blowingly hot. And at other times, it is the complete opposite especially due to the behaviors of your partner during the activity. Find out more about this behaviors by checking the list of ten weird things women do during lovemaking, according to men.

1. Farting.
There is often a direct correlation between how a couple becomes close and how much less the couple holds off their farts. This reality is true either inside or outside the bedroom. Farting freely is often a sign of devotion.

However, it can also be awkward during a passionate romp. For the sake of preserving the mood with your partner, you may try avoiding farting. Holding off a fart isn’t something you can avoid forever as a couple. At times, women are bound to stink things a little bit during lovemaking. On men’s side, it may be annoying and embarrassing for the woman.

When you can’t prevent it, and it slips out, the best thing to do is to apologize and laugh about it. This is often a challenging issue as it deals with sensitive issues of jealousy and insecurity. While some men may just ignore the whole incident, to some it’s a serious issue that should be discussed.

3.Making fake sounds and moaning.
Most women have adopted the quiet and quick rule during lovemaking. However, quite a number make unauthentic sounds that are a clear indication they are faking. While the moaning and screaming increase the pleasure for the women and their partners, it might also put off their partners. Therefore, before making the sounds, it’s important to note whether the sounds turn on your partner.

4.Biting
Some women are known to bite during lovemaking. Biting and scratching are fun. In fact, during lovemaking, your pain threshold is higher as the part of the brain that processes the activity is also the part that processes violent urges. However, if your partner isn’t taking it in the right way, try taking a different approach rather than biting. Some women say that they bite the same way men grab their hair.

5.Insisting the room to be pitch black.
A lot of women prefer to make love in the dark. This is because most women are self-conscious about their body. However, the saddest thing about the issue is that men rarely notice the so-called imperfections that women agonize about. Making eye contact often puts the two of you at ease.

For some women, they believe, making love in the dark is exciting. Once in the dark, the senses are heightened as the woman cannot see and has to use feelings and sensations.

RELATED ARTICLE: 6 Moves for Bringing Back That Crazy Passion in Your Bedroom

6.Urination.
To some women, urinating may be a health problem, but to others, it might be due to romance and pleasure. Internal simulation as a result of penetration is another cause for urination during romance. The best way to deal with urination issue is to rush to the bathroom before the embarrassing moment. This will slow the momentum of the moment, but it’s better than peeing on your partner.

9.Periods during lovemaking.
Periods at times interrupt the party when least expected. Some men do not have an issue with this issue, but some others may find this weird. Before getting into the mood, women should ensure that they are sure of their condition to prevent putting their partners in a compromising position.

10.Nodding off and yawning.
Many modern women rarely get enough sleep. By the time they climb to bed, they are often very tired. They are not usually interested in committing an ounce of their remaining energy to any physical activity. In such cases, some women may nod off during lovemaking and even fall asleep. Others may even yawn. When correctly executed, the closing of the eyes can result in a mind blowing pleasure for the other partner.

Regardless of your experience, the best way to go through such issues is to discuss the issue with your partner. You will be able to kill the tension that is there due to the weird behaviors.