PositiveMed The Positive Side of Medicine
Home health sleep Not Sleeping 8 Hours a Night? Good! 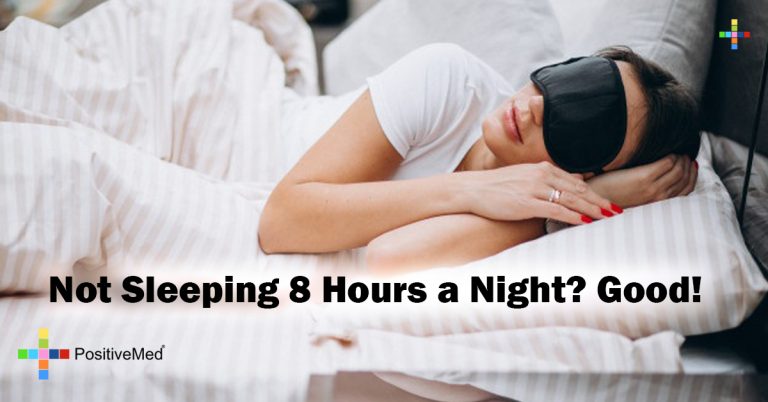 Not Sleeping 8 Hours a Night? Good!

We all know we’re supposed to get a good night’s sleep, but many of us struggle to fall asleep, let alone stay asleep. It seems every week there’s a new article or product available to help us sleep better for longer. We keep electronics in another room, exercise in the afternoon, stop watching TV and using the computer at least an hour before bed, don’t sleep with your phone, change your sheets every two weeks and your pillowcases every week, blah-blah… However the truth of the matter is, when it comes to sleep, eight hours is probably a gross estimation – meaning we should be getting LESS, not more.

That being said, you shouldn’t be trying to operate on less than six. The magic number for most people to be at peak condition is actually seven hours. Those who sleep five or less hours a night are at an increased risk for cardiovascular disease, as are those who sleep more than seven (including naps).

In fact, humans aren’t supposed to be sleeping for a solid block at all. Sleep studies conducted on humans have discovered that when all electric lights are removed, people sleep for three to four hours at a time with an hour to ninety minutes of activity followed by another three to four hour block. Ideally speaking, we should all be getting around seven hours, according to Discovery Health.

As we get older, we actually need less sleep. After testing nearly 500 elderly women, they found that those who slept less than five hours and more than six and a half had higher mortality rates.

So why do so many people think eight is the ideal amount of sleep? Years ago there was data collected from young adults who reported that they slept seven and a half hours during the work week and eight and half during the weekend. As time passed, the average amount somehow morphed into the target we should all aim for. So, why eight? Because it’s the average, simple answer.

Too much sleep, however, can lead to obesity, diabetes, and, as mentioned before, cardiovascular disease. The good news is, cognitive functions and memory don’t appear to be affected by oversleeping – however, they are affected when people get too little sleep. In fact, the short term effects of too little sleep are striking and quite worrisome. Lack of sleep causes more stress, causing more cortisol, causing weight gain, which causes stress, leading to lack of sleep, which makes more cortisol, ad nauseum. If you’re not sleeping well, you have a lesser quality of life, have difficulty paying attention, and are more prone to having an auto collision or occupational injury – YIKES!

So, if you’re averaging two naps a day and feel fully rested – you’re probably fine. That doesn’t mean to skip the doctor, but if it works for you, don’t worry about it. Don’t listen to your friends who brag about being “champion sleepers.” However, if you think you or a loved one is chronically under-sleeping, bring it up at the next check-up. If it’s insomnia, get to your family physician as soon as you can.