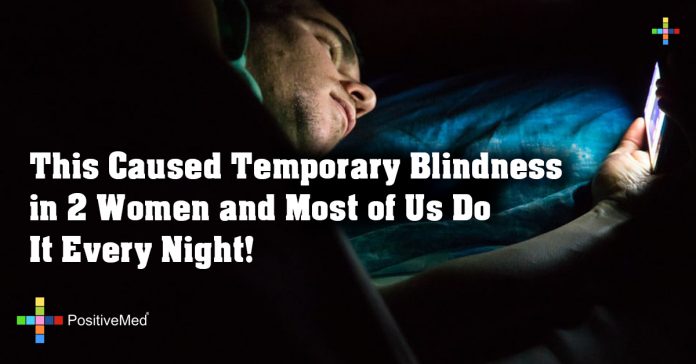 This Caused Temporary Blindness in 2 Women and Most of Us Do It Every Night!

As a mother, most people do not understand that, after a hard day at your work, you get home to start a whole new job. Between getting dinner started, checking homework and bringing in the laundry women have little time for themselves. The time they choose to do personal activities, could be causing them temporary blindness. It is not just women, but so many people have become habitual users of smart phones in bed. The problem is not using the phone in bed; it is using it in darkness.

Women are the main culprits due to their busy nightly schedules. Before they fall asleep, they will need to check emails. After all, they need to be at work the following day, aware of the day’s agenda. If they are not checking work, they are reading their favorite magazine. Away from women, studies have shown that about 80% of smart phone users check their phones, first thing when they wake up.

The problem affects teenagers significantly. A typical teenage girl will go to her room, switch off the lights and chat on her phone for hours. An article in the New England Journal of Medicine gave two case studies of women who had complained of temporary blindness.

The first lady was 22 years old and visited her doctor complaining of temporary blindness on her right eye at night, while she was in bed. She had experienced the problem several times a week for an entire year before she thought it was wise to see an optician. On further inquiry, she told the doctor that she could only see outlines through her right eye during the blindness episodes, but the sight in her left eye was perfect. During the day, vision in both her eyes was normal. The doctor did some test to check for causes of temporary blindness, but they found none.

The second 40-year-old lady could not see through one of her eyes early in the morning for about fifteen minutes. She had experienced the problem for about six months which forced her to seek a doctor’s opinion. The common factor in both women was the use of their smart phones, while still in bed with the lights switched off. It was a relief for both women to learn that their symptoms were not indicative of a significant underlying problem.

Their temporary blindness was as a result of exposing one eye to light. When lying in bed, one eye was covered by the pillow, while the other one was viewing the screen. It is not something they had realized till the doctors brought it to their attention. When the pillow covers one eye, it adapts to the dark. The other eye viewing the screen adjusts to light. When the phone is switched off, and both eyes are in darkness, the light exposed eye if now forced to adapt to darkness. The moment of light adaptation is when they experienced temporary blindness.

RELATED ARTICLE: THIS IS WHAT HAPPENS TO YOUR BODY WHEN YOU ARE READING ON YOUR SMARTPHONE BEFORE BED!

For both cases, the problem was in the eye viewing the screen. These diagnoses have answered questions for an issue that is becoming increasingly common. The more people use smart phones, the greater the number of individuals experiencing temporary blindness. The solution as recommended by doctors is simple. As much as night or temporary blindness is not a serious problem, care should be taken. The doctors urge people to look at their phones with both their eyes in the darkness. Alternatively, they can switch on the lights before they view their phone.

The American Academy of Ophthalmology found the cases fascinating, and they are carrying out more research. The Academy blamed the condition on the increasing brightness in smart phone screens. They encourage people to have practices that do not affect their eyesight.

Use natural ways to improve eyesight. Eating foods rich in minerals such as copper and zinc improves vision. Foods rich in beta-carotene protect the eyes from sun damage. Learn to exercise your eyes to make use of all optical nerves. Rub your hands and place them on your eyes or place a pen at arm’s length, and try focusing on it for about 5 minutes. Get enough sleep to allow eye cells to rejuvenate. For those constantly on computers take 10-minute breaks for every hour spent working.