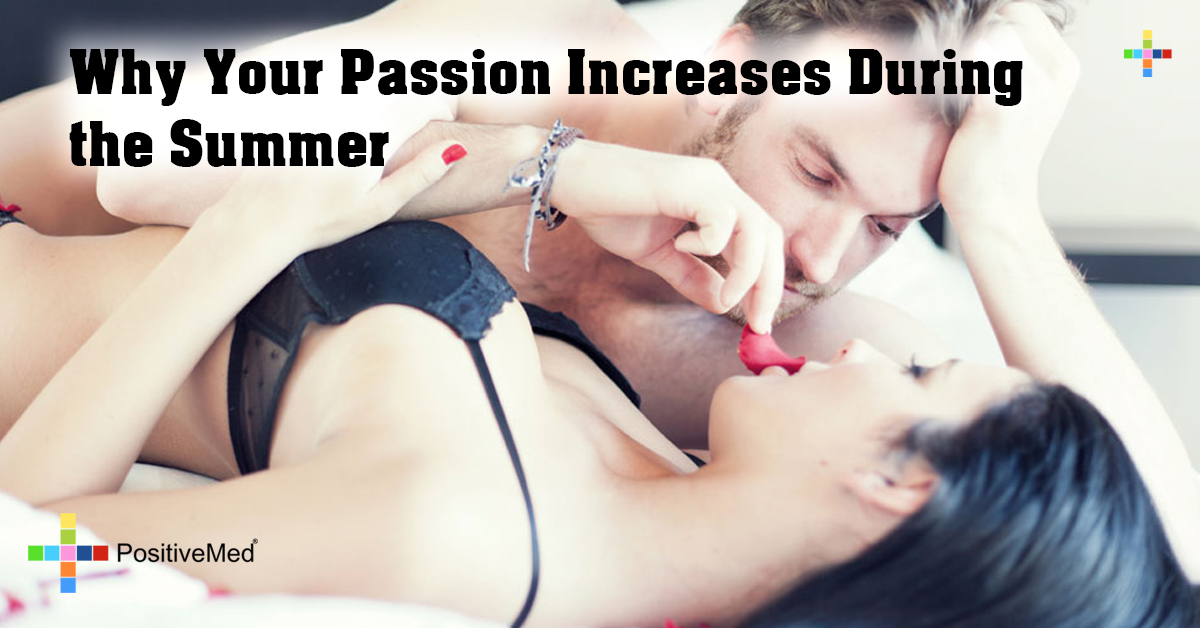 Why Your Passion Increases During the Summer

It’s one of the most exciting times of the year. We’re talking summer. Beaches, pools, amusement parks, vacations, picnics and barbecues. It’s also when we see less clothing. We shed the sweaters, parkas and boots, and, just like that, we’re incredibly attracted to one another. But it is not fully explains why passion increases during the summer. We may complain about the humidity, but studies have shown we’re more likely to sweat up the sheets during the summer months. Here’s why.

Sunlight has been directly linked to serotonin. This is a significant neurotransmitter that enhances the sensation behind pleasure. That makes the sun a mood booster. It’s why we spend more time hitting the gym, the basketball court and other physical endeavors than other times of the year. But that physicality also extends to bodily contact. The Archives of $exual Behavior reports that relationship-related Internet searches receive some of its highest numbers in June and July.

It’s also believed the summer could subconsciously orchestrate a humankind de facto breeding/mating season. The colder, darker months produce melatonin in the brain’s pineal gland. That makes us sleepy and sluggish. The higher temperatures and sun of warmer months minimizes melatonin production. This triggers connections to the genitals. The result is the summer enhancing our energy and optimism, which leads to greater hope and desire to connect with others.

The sunlight also plays a part in our vitamin D levels. It is suggested that’s why the summers see fewer headaches, less fatigue, and better sleeping and rest. In that regard, we feel good. This is a confidence booster. We feel better about ourselves and in turn feel others will too. Also, endorphins are pumping as we get out and move around. The bursts of good mood and energy can increase feelings of arousal.

Are We Oozing Passion?

Sweat may be critical in our summer passion. Sweat plays a role in pheromones, that alluring and mysterious compound that goes airborne, giving all types of animals the ability to communicate without making a sound. On top of that, sweat looks pretty hot. But it may go beyond the look. Summer heat may cause us to secrete chemicals that relate to attraction. What may also make a difference is how chemicals combine. Things like pheromones, sweat, skin bacteria and diet may give each person a distinctive allure and even smell with sweat heightening the scent’s promulgation.

Can’t Get You Off My Mind

Embodied cognition, or embodied mind thesis, is the idea that human thought is shaped as much by aspects of the physical form beyond the brain. This said, rising temperatures could possibly prime our emotional need for closeness. After all, we love the warmth of bodies together. Heat heightens that desire to connect and get physically close, and there is no greater close than locking bodies in the dark.

Is That Passion Awaiting?

Not surprisingly, we see cues for passion throughout the warmer months. Men are happily displaying their musculature, looking tough in shades and anxious to demonstrate their athletic prowess. Women’s clothing gets more revealing, and the volley ball courts and bikinis remind us exactly why they’re so desirable. We’re also friendlier, more likely to interact, especially while on vacation and day trips. These factors are definitely play into reminding us why we want to get close.

Do high temperatures really heighten our need to share passion? While evidence might seem to say “yay,” it should be noted one of the other months when sex-related engine searches peak is January, one of the coldest months. It’s also said one-third of people have rejected sweating up the sheets because of the heat. Of course, that means the other two-thirds said “yay.”