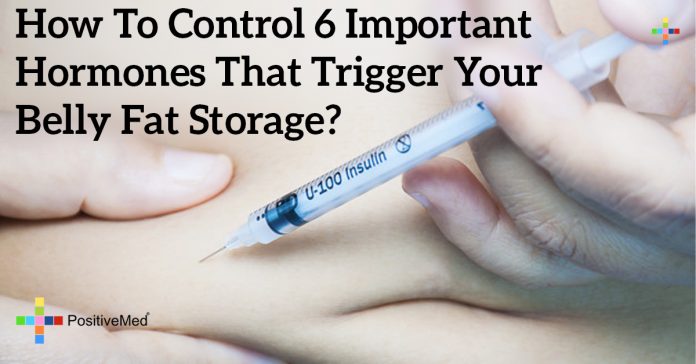 How to Control 6 Important Hormones That Trigger Your Belly Fat Storage?

Are you flabby around the middle and can’t seem to get that stubborn belly fat to go away? I’ve struggled with plenty of diets and workout plans that are guaranteed to burn that fat away, but unless I stayed in the gym 24/7 and stopped eating everything, I’d never seen a single inch disappear from my middle. The bad news is that your struggle in the middle is, mostly likely, due to a hormone problem. The good news is that you can do something about it by regaining control of six hormones that are responsible for increasing belly fat; and you can do it naturally.

Six Hormones and How They Contribute to Belly Fat?

Insulin is a hormone that inhibits the breakdown of fat cells and stimulates the creation of body fat. A high insulin level contributes to a higher level of fat storage and a lower level of fat metabolism.

Estrogen plays a role in contributing to belly fat, because it helps increase the number of alpha-adrenergic receptors in the body. These receptors inhibit the release of fat and facilitate its storage.

RELATED ARTICLE: THE WEIGHT LOSS SECRET OF WOMAN WHO LOST 11 POUNDS IN 2 DAYS

Cortisol is a hormone produced during times of stress. When cortisol levels are high, your body reacts as though you might starve, consequently, it hoards fat. However, its role in belly fat production remains open to a great deal of debate.

DHEA (dehydroepiandrosterone) is the CEO of the endocrine system. When DHEA levels become low, maintaining the proper balance of estrogen, testosterone and cortisol becomes limited and your metabolic rate drops into the basement.

HGH (Human Growth Hormone) works like testosterone, but on a larger scale. Anabolic activity, when decreased, due to low HGH levels, contributes to lowering fat metabolism and has the most profound effect of the six hormones.

How Do You Regain Control of Your Fat Producing Hormones Naturally?

Ready for the list of bad foods and good foods to correct your hormone imbalance? Having played that game a number of times, I can tell you that such an approach is a losing battle and you’ll quit long before you lose an inch from your middle. What is required, and the way that I shredded 3” from my flabby middle in 10 weeks, is through Intermittent Fasting (IF).

What Is Intermittent Fasting?

There are numerous types of IF programs on the health and fitness scene. Each has its different levels of appeal as it relates to different individuals and their lifestyles. Intermittent Fasting is setting aside a period of time when you don’t eat. Simple as that.

How Does Intermittent Fasting Effect the Six Hormones That Contribute to Belly Fat?

Lowers Insulin Levels. When you don’t eat for a while, your body initiates several important cellular repair functions including lowering your blood insulin levels, which in turn, promotes fat metabolism instead of fat storage.

Raises HGH to 5x Normal Level. Because HGH has such an enormous impact on your metabolic rate, this factor is the major reason that IF works. In fact, IF has been shown to raise HGH levels by as much as five times their initial level. That significant increase has a radical impact on fat metabolism.

Raises DHEA . As mentioned before, this hormone is a regulator of testosterone, estrogen and cortisol. An increase in your DHEA levels from intermittent fasting will return all three of these hormones to healthier levels and reduce their effect on belly fat production.

Getting rid of a flabby middle is not an easy task. It will require a lifestyle change that includes getting control of your eating habits and exercise. The good news is that it can be done. The 3” I shredded from my midsection are proof. But it won’t go away on its own. You have to correct the hormonal problem by bringing them under control. Intermittent Fasting is one method for finding success in regaining that control.

If you have comments, questions or suggestions about this article please don’t hesitate to weigh in.