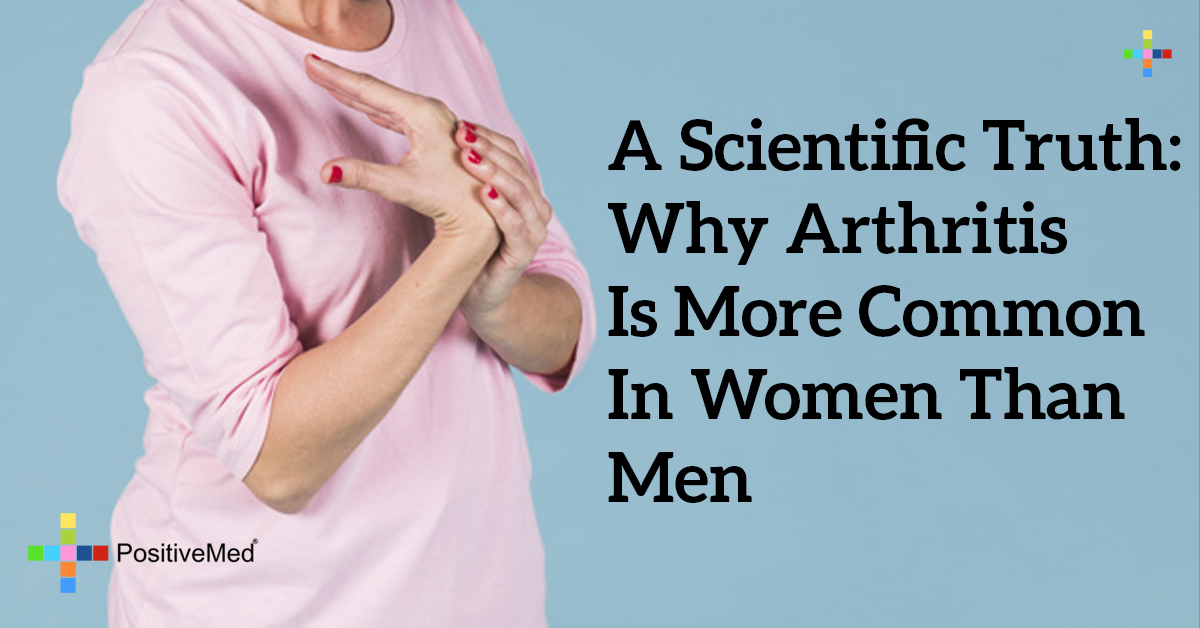 The aching, stiffness, and constant twinning in your joints is not just your imagination. Arthritis covers a group of over 100 diseases that result in swollen, painful joints and another connective tissues or organs. Research shows that women fall victim to the crippling effects of the more common types of arthritis—rheumatoid and osteoarthritis—more often than men. Women are prone to autoimmune diseases like arthritis because of their gender’s biochemistry.

The American College of Rheumatology has conducted several experiments over the years, concluding that roughly 1 in 4 women will be diagnosed with arthritis. In one particular survey, originally done in 2012 and updated as of March 25th, 2016, the predicted number of United States adults living with some kind of doctor-diagnosed autoimmune disease to be 52.5 million. Of that 52.5 million adults, 22.7 million had arthritis-attributable activity limitations (AAAL). It is projected that by 2040 the cases of diagnosed arthritis will increase by 49%.

The reasons arthritis develops are unique to the case. Hypotheses have stated arthritis is due to DNA. A study done in 2012 at the University of Manchester by the Arthritis Research U.K. Epidemiology Unit delved into pinpointing genes in women that might cause rheumatoid arthritis. Women have two X chromosomes while men have an X and a Y. 46 genes on the second X contained structures associated with the disease. The Arthritis Research Unit announced that it was a great discovery, because they could begin isolating the genes to concoct a more effective medication or find a cure.

RELATED ARTICLE: She Found a Key to Cure Her Arthritis and Here’s What It Is

However, environmental factors also increase the likelihood of developing rheumatoid arthritis—the second most common form of the disease. Illness, smoking, an unbalanced diet and pregnancy have shown certain effects on female biochemistry. The worse one’s health, the higher the risk of developing inflammation in the joints or stress in the bones. While women tend to have stronger immune system, the amount of stress felt tends to be stronger than with males. Women also have higher instances of heart disease, diabetes and other autoimmune diseases.

In the aforementioned study done by the American College of Rheumatology, U.S. adults 65 years old or greater experienced more arthritic symptoms when coupled with heart disease or diabetes. Of the 22.7 million adults with AAAL, 28.2% were obese, suggesting that weight also factors into arthritis.

Another type of arthritis prevalent in women is osteoarthritis. Usually produced by life-related wear and tear, there are other contributing factors. An estimated 16.2 million women in the United States suffer from the disease, with the majority of pain being felt in the knees and hands. Doctors and specialists around the world are constantly laboring to understand why women are vulnerable to not only autoimmune diseases but to weaker bones as well. Where rheumatoid arthritis sees environmental effects mixed with genetics, osteoarthritis is more reliant on female physiology and anatomy.

The New York University’s Hospital for Joint Diseases has researched how such components link to osteoarthritis in woman. The conclusion they reached was linked to female body structure. Since women are designed to carry children, the hips are wider than the knees. The balance on weight in the body puts an extra strain on the knees that men do not experience. Secondly, the Hospital for Joint Diseases found that osteoarthritis is hereditary. A daughter’s arthritis will develop around the same age as her mother or grandmother’s had.

Lastly, similar to link to rheumatoid arthritis, hormones play another important role in bone health. Estrogen has the ability to shield cartilage from harmful damage and injury. After menopause, estrogen production drops or becomes nonexistent. Suddenly, the bones are unprotected, and the rate of osteoarthritis skyrockets. Not even hormone replacement therapy wards off arthritis. An interesting piece of the research revealed early menstruation raises the probability of needed joint replacement later on in life.

Arthritis is an anguishing disease, but it does not have to ruin the days ahead. Though nothing can be done to alter one’s biochemistry, living a healthy, balanced lifestyle can alter the end result or reduce the struggles that come with arthritis. Women who stay active and positive can overcome any challenge.