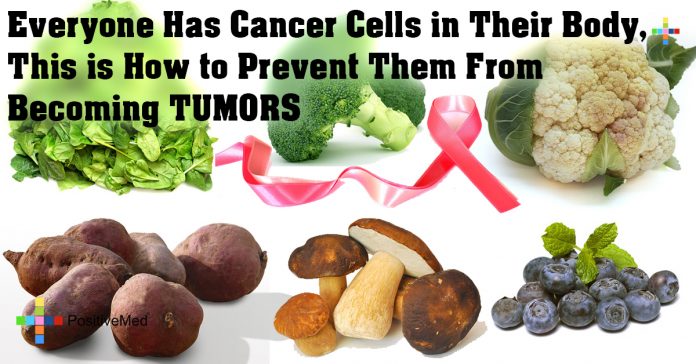 Cancer is one of the problematic medical conditions that modern society has to deal with. It can occur anywhere throughout the body when a cell mutates. These cancer cells start spreading rapidly growing cancerous cells throughout the body. Everyone knows that certain environmental factors, like smoking cigarettes, can increase cancer risk, but even if you lead the healthiest lifestyle imaginable, it is still possible to develop cancer.

This happens because certain genes can be inherited which make cells far more likely to mutate. Though you cannot control your genes, you can still control environmental factors that make certain aspects of your genes function better. Instead of getting in contact with carcinogenic chemicals that trigger the activation of cancer-causing genes, eat foods that initiate genes that suppress cancer and tumor formation.

The main way that spinach halts cancer is by containing glycoglycerolipids that inhibit harmful DNA polymerase activities. A study by Japanese researchers also showed that spinach glycolipid extracts have an anti-inflammatory effect, which prevents cells from becoming damaged by free radicals and turning cancerous.

All of the vegetables in the cruciferous family help to prevent cancer, but kale has extraordinarily high levels of polyphenols, which are natural compounds that prevent DNA from being damaged and starting to mutate.

Like kale, broccoli is also a cruciferous vegetable that protects the body from DNA damage. It also contains sulforaphane, which has been shown to reduce breast cancer tumors by targeting and destroying cancer stem cells.

Several studies have linked cauliflower consumption to lower occurrences of cancer because it contains phytonutrients that help to activate enzymes that destroy toxins, and the lowered amount of toxins results in less cancer.

Due to a mix of various compounds, studies have shown that sweet potato extract can inhibit the growth or development of cancer cells in the colon and rectum.

Mushrooms contain compounds that make them mitotic kinase inhibitors. This means that they stop cancer on a cellular level by stopping cancer from copying its genetic information into new cells.

Blueberries contain many different types of anthocyanin compounds, including delphinidins, cyanidin, and malvidin. These antioxidants protect cells from cancer.

Cabbage contains a particular form of a glucosinolate, called sinigrin, that can stop or slow the growth of cancer cells. In order to get the biggest benefits from sinigrin, be sure to eat the cabbage when it is still raw and fresh.

Almost all varieties of seaweed contain fucoidan, which is a complex polysaccharide that can cause cancer cells to turn against themselves instead of harming the body.

Lemons have a powerful phytochemical, limonene, that has been used to reduce carcinomas by up to 80 percent in size.

Almost all berries are a great source of ellagic acid, a compound that stops cancer growth. Raspberries have the highest compound, and darker raspberries have especially high levels.

12. Garlic
Several studies of large populations have shown that people who eat garlic are far less likely to get cancer. Eating it chopped instead of crushed or whole particularly encourages these benefits.

13. Carrots
Carrots have very high levels of Vitamin A and other useful nutrients, but their most important cancer-preventing ingredient is falcarinol. These cancer-preventing compounds encourage the body to fight inflammation before it can damage cells and cause mutations.

This spice contains curcumin, a phytochemical that can stop the growth of cancer cells before they turn into tumors.

Rosemary extract contains carnosol, ursolic acid, and rosmarinic acid, and all of these compounds have been linked to cancer prevention.

The lycopene from tomatoes helps to destroy cancer cells without harming normal cells. Interestingly, some studies have shown that both broccoli and tomatoes have stronger cancer preventing properties when they are eaten together.

This tropical fruit has been shown to have some anti-cancer effects. While researchers still are not sure what exactly causes this, it is still a good idea to add some papaya to your diet.

Oranges contain forms of most naturally occurring cancer cell inhibitors. Most of these powerful compounds are in the peel, so try adding some orange zest to your meals.

Brazil nuts have incredibly high levels of selenium in a particularly bioavailable form, and selenium has been shown to be a great form of cancer chemoprevention.

Green tea contains epigallocatechin gallate, a catechin that has been linked to many health benefits. Most importantly, this catechin stops cancer cells from metastasizing, which happens when cancer cells spread throughout the body.

Regularly including these foods in your diet may greatly reduce your risk of cancer. Since there is no way to cure cancer by dietary changes once it starts, it is important to try to prevent it before it begins. By encouraging the activation of protective genes, you can ensure that your body remains in good condition and can fight off cancer.