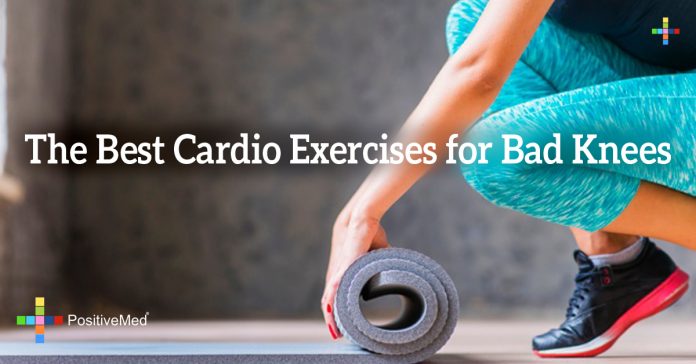 Getting healthy is a daunting task and with bad knees, it can seem nearly impossible to do any cardio at all. Generally, women have more problems with their knees than men. The University of California says this is due to minor differences in the way our bodies are built, ladies tending to have wider hips, causing additional stress.

Kettlebell swings are one of the best options out there that aren’t a machine. Kettlebells strengthen the glutes, lower back, and hamstrings while sparing the knees. Proper hip hinging is crucial for anyone wanting to be more athletic, and this exercise does a great job of teaching the movement pattern. Try starting out with twenty-five or thirty pound kettlebells and work your way up to heavier weights. Three to five sets of 20-40 reps should be sufficient. Remember to keep your back flat and push your butt backwards when you go down and thrust hips forward when coming up. Your arms are simply hooks and all the power is generated by hip extension. DO NOT SQUAT DOWN, it’s bad form and you will get injured.

Another machine-free option is battling ropes. These ropes are 30 to 40 feet long and most gyms have one or two sets sitting around, somewhere. Loop one end around an immovable object and pull out the slack, making both ends equal. Make sure you have a stopwatch and use it to do timed rounds. Twenty seconds is typically brutally hard for most people. After those twenty seconds, rest for another twenty to sixty seconds before continuing on to the next set.

You can do a few different exercises, such as in and out waves – rapidly and rhythmically move your arms out and away from your body, then bring them back together, creating waves with the rope. Rope slams are fast and aggressive. Grab both ends of the rope and slam it up and down quickly and with a lot of force. Another form of waves are up and down, moving rapidly and creating waves. You can also do alternate waves – when one arm goes up, the other goes down.

These exercises can be incorporated into one workout by doing them in a circuit fashion; do one for twenty seconds, rest, do the next, rest, and so on. Do it two to five times for a brief, but intense, session.

As for machine exercises, the elliptical is one of the best-known ones available. Elliptical machines combine the movement of riding a bike with jogging or walking. By adjusting the machine, such as the incline, resistance, or cadence, you can customize the exercise to your fitness level. While elliptical machines are very low impact, providing an effective workout without undue stress on the knees, they are very effective. Some sources note that an 185-pound person can burn about 400 calories in a half an hour.

Rowing machines are also great to use and bring the added bonus of a full body workout to the table. Rowing is no-impact and is great to strengthen the arms, shoulders, abs, back, and legs without putting stress on the knees. The knees are able to move through a full range of motion without supporting weight as they’re horizontal.

Stationary or recumbent bikes are also safe and effective. They’re often used in rehabilitation and strengthen, as well as improve, the range of motion in the joint as well as the muscles surrounding the knee, creating a more stable joint.