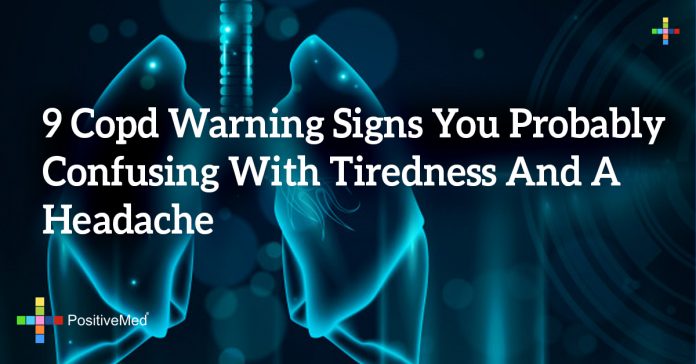 Chronic Obstructive Pulmonary Disease (COPD) is a lung condition that affects millions of people worldwide. This lung condition occurs when the passages and air sacs of the lungs become thickened and damaged, preventing the lungs from getting enough oxygen. Often, people are not diagnosed with COPD until they are having extreme difficulty breathing, but there are many warning signs before the condition gets to such a severe stage. If you have any of the follow symptoms, you may have COPD.

Shortness of breath that occurs during regular daily activities is one of the major signs of early COPD. In addition to running out of breath while climbing stairs or doing other mildly strenuous tasks, you may notice this happening even when you are not moving at all. At early stages, this shortness of breath might only happen every now and then, but it is still one of the warning signs.

As COPD progresses, coughing gets worse and worse. If you have a cough that will not go away for several weeks, it may be due to your lung’s inability to function properly. The persistent coughing associated with COPD will typically not be accompanied by the normal symptoms of a cold or flu.

The many different symptoms of COPD all combine to affect sleep quality. Difficulty breathing and random coughing can both make a person wake up while he or she is trying to sleep. Even if you do not completely wake up, COPD can affect the quality of sleep enough to keep you from getting a good night’s rest. This warning sign of COPD may also be due to the other conditions that often coincide with the disease.

The lungs are not the only organ that is affected by COPD. When there is not enough oxygen in the bloodstream, the heart has trouble working hard enough to circulate oxygen throughout the bodies. This heart strain can cause fluid to build up as the less important functions of the body get less blood and oxygen. The fluid tends to accumulate in the body’s lower half, so ankles, legs, and feet all become swollen.

There is usually some mucus in the lungs that is supposed to keep passageways moist. However, extreme mucus production is a warning sign that has been linked to an immediate decline in lung functioning by several studies. Changes in texture, color, or amount of mucus may all be a sign of COPD, especially if the mucus appears to contain blood.

When the body does not get enough oxygen, it has trouble producing energy. This causes people in the early stages of COPD to constantly feel tired and exhausted. Studies on the subject have revealed that patients with COPD feel more tired than people without COPD, even though the people with the disease do less physical activities. The difficulty sleeping and the feelings of breathlessness that are also warning signs of COPD tend to make the fatigue even worse.

Many people with COPD end up sleeping in an armchair instead of a bed, because they have trouble breathing while lying down. This happens because there is more pressure on the lungs in the reclined position, making them have to work harder than they already do. For people with COPD, breathlessness may occur as soon as they flat on their back, and it often goes away as soon as they sit back upright.

Waking Up With a Headache

While you are sleeping, it is even harder for the lungs of a COPD patient to work correctly. If you wake up feeling dizzy, lightheaded, or in pain, it may be due to the fact that the lungs are not properly filtering the air. Instead of getting enough oxygen, you may be having carbon dioxide accumulate in your bloodstream, causing intense headaches.

Suddenly losing weight without changing your diet or activity levels is always a sign that something is physically wrong. For people with COPD, the unexplained weight loss is because the lungs are physically working harder to breathe. This difficulty breathing can increase calories burned during inhaling and exhaling by up to ten times. The weight loss caused by this COPD warning sign can also be because of a loss of appetite.

If you notice any of these warning signs, you should talk to your doctor about your symptoms as soon as possible. The most common cause of COPD is smoking, so if you have these symptoms, it is important to stop smoking to prevent further lung damage. A COPD diagnosis also allows you to start trying natural treatments, including vitamin E supplements, yoga, breathing exercises, and acupuncture, which may all help to improve COPD symptoms. With early detection, you can slow the progress of the disease and improve your quality of life.