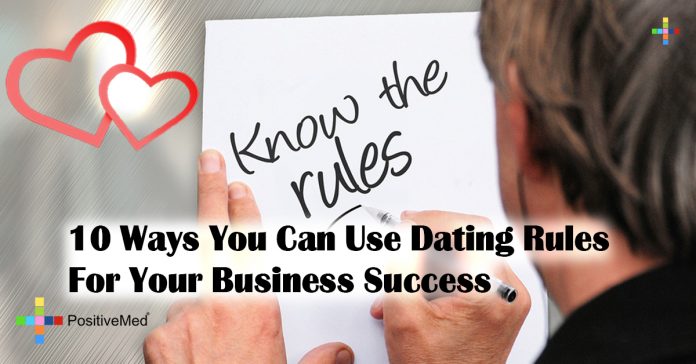 10 Ways You Can Use Dating Rules For Your Business Success

1.) Put Your Best Foot Forward
While honesty is important in dating and business, you don’t want to parade out your personal flaws. Be yourself, but try to present yourself well, too. Do you tend to chew your nails, put away an entire pizza by yourself, or spend three-hour blocks on Facebook? Yeah, those things you might want to keep to yourself for awhile, if not indefinitely.

2.) Technology is Not the Enemy
It’s 2016, and odds are if you’re reading this you’re not too tech adverse. And that’s great, because whether you’re trying to score a second date or a business deal you should be utilizing technology. Love and business can both involve social media, e-mail, and more. Don’t be afraid to send your boss a text or like that hottie’s Instagram post.

3.) …But Be Careful of Oversharing Online
Wild nights with friends might be fun occasionally, but posting pics on Facebook might give the wrong impression to a potential date or a boss. Same goes for drunk texting/tweeting. If you have doubts about posting something, try to picture what your grandmother would think. You don’t want to give the wrong impression to coworkers or possible romantic interests who don’t know you well yet. Furthermore, be thoughtful what you say about your significant other or employer online—jobs as well as relationships have been lost over social media posts.

4.) Be Willing to Try New Things
In a relationship, this might mean trying out sushi or paintball. Doing things your partner is into helps you understand them better, and new experiences are great for bonding. In business, this could mean setting up interdepartmental meetings or letting the intern start a company Twitter. In both business and dating, you might stumble upon something that really works, and even if you don’t it shows that you’re open to doing things differently.

5.) There Will be Ups and Downs
That rosy glow, nice as it is, won’t last. The workplace has office politics, and last night’s perfect date changed her number. These things happen, so try to roll with the punches. Sometimes when things go sour the only thing you can control is you. Shrug it off and try to move forward.

6.) Don’t Play Games
With all relationships, business or romantic, try to be up-front instead of playing head games. Don’t play hard to get if you like someone. If you want a raise, go ahead and ask. Everyone is too busy to try to interpret mixed signals. Don’t be rude or overly forward, but certainly be honest about what you want.

7.) Manners Still Matter
Old-school manners might seem outdated, but they still make a positive impression, whether you’re after love or money. For instance, Forbes–and your mother—still recommend writing a handwritten thank-you note after an interview. And although women are perfectly capable of opening doors, Esquire found that 72% of them still prefer their date to do it for them. You won’t come across a lot of people who judge you for chewing gum in public anymore, but it’s hard to go wrong with opening a door or saying thank you.

8.) Try to Leave Out Politics and Religion
Many of us cringe every time politics comes up socially, especially during an election year. It rarely ends well. Even people on the same side of the political spectrum find things to argue about. At work, try to leave these topics alone as much as possible. For a relationship, it will come up eventually. But right off the bat, try to stick to other topics. The only exception would be if you wouldn’t possibly consider dating someone with different political or religious views than yours, in which case you should probably just find out without wasting much time.

9.) Gender Roles Are Over
I know, I already said ladies like a guy to hold doors for them. But even so, gender roles are pretty irrelevant in business and dating. Sheryl Sandberg, CEO of Facebook—and the women before her—have announced that women belong at all tiers of the business world, and men are just as fit to stay home and raise the kids. Her book, Lean In, is an worthwhile read for men and women. Of course, if your partner and you fit into traditional roles and are happy with that, don’t sweat it. But don’t be afraid to do things differently than your parents may have.

10.) Rules are Meant to Be Broken
And that can even include the above! Think of them more as guidelines, as Johnny Depp might say. There are exceptions to everything. Love is the craziest thing and money is a close second.