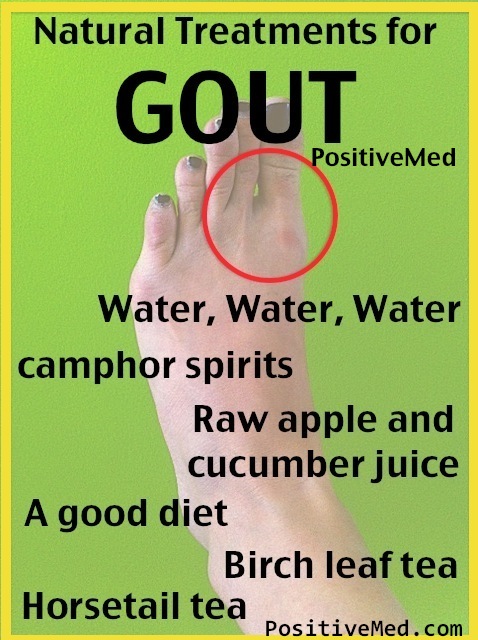 Gout is an acute disease of the joints, when your kidneys become less effective at flushing away excess uric acid, the acid begins to crystalize in your joints, tendons, and muscles, leading to swelling, pain and tenderness, caused mostly by a hereditary factor and bad diet.

In fact, there was a time when this painful form of arthritis was kind of a status symbol, since a diet of red meat washed down with port can bring on the disease, so anybody who could afford to eat expensively could complain, with a certain amount of satisfaction. It is caused by the deposition of chalky crystals around the joints, tendons, and other body tissues when there is an abnormally high level of uric acid in the body as I mentioned earlier.

The first sign of gout in usually excruciating pain and inflammation of the innermost joint of the big toe (could be ankle, knee joint, hand, wrist or elbow).

Here’s how you can give the nasty old ailment the boot:

Get flushed! Drink plenty of water and herbal tea to help your kidneys flush out uric acid.

Birch leaf tea and horsetail tea act as a diuretic, helping to flush out uric acid too, it also contains salicylate, the same pain-relieving compound found in aspirin.

A good diet is key, eat plenty of greens and vitamin C, if you get attacks of gout, avoid alcohol and rich organ meats such as liver and kidneys.

Rub the painful joints with camphor spirits (a solution of camphor and rubbing alcohol).

Raw apple and cucumber juice will help to reduce the severity and incidence of attacks.

One of the most recommended treatments is 2 teaspoons of Black Cherry concentrate Juice with one tea spoon of natural Apple Cider Vinegar mixed with glass full of water first thing in the morning every day until healed.

From: Home Remedies from a country Doctor from Jay Heinrichs, Dorothy Behlen Heinrichs, and the editors of Yankee Magazine, 2013.
From: Natural Remedies for Healthy Living , The Readers Digest Association,2011
From: The Illustrated Encyclopedia of Healing Remedies, C. Norman Shealy 2002