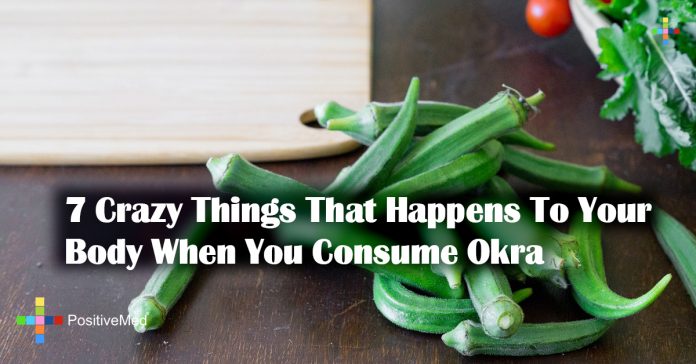 One of the most overlooked vegetables is okra. There’s little wonder why it escapes reference and a place on most dinner plates. Boiled or raw okra isn’t a particularly savory vegetable, but it has an intense taste. The okra’s skin isn’t much different from a pepper’s, but its interior houses a gooey substance that makes its way into soups to add thickness and texture. Where okra lacks in instant appeal, it more than compensates with its potent nutritional arsenal.

A bevy of nutrients — vitamins, minerals, antioxidants, fiber — are concealed within this fantastic vegetable called okra. One cup of raw okra has less than 40 calories and roughly three grams of fiber, two grams of protein and around eight grams of carbs. Its fat content is negligible. Okra also boasts between 50-100 milligrams of magnesium and folate. 20mg of vitamin C tops off an already impressive arsenal. Think about that the next time your salad is 90% iceberg lettuce!

Let’s look at seven major health benefits that result from making okra a part of your regular diet:

For anyone who has it or is familiar with it, asthma can be very unpleasant. Try to breathe through only a thin straw all day and you’ll get an idea. Vitamin C is a known boon to asthma sufferers, and okra has it. Medical journals like Thorax confirm the regular intake of citrus greatly diminishes labored breathing, called wheezing — a standard asthma symptom. Citrus possesses vitamin C, and so does okra. Sufferers of moderate to intense asthmatic effects will want to eat okra regularly to take advantage of its anti-inflammatory benefits.

Okra’s aforementioned vitamin C and antioxidant levels reserve it a high rank among immune-boosting foods. C is integral to a healthy white blood cell count. White blood cells are what fight off the invaders: microbial infection, harmful bacteria, and viruses.

Diabetics need soluble fiber regularly to stabilize blood glucose. Okra was found in laboratory studies to reduce the speed of glucose absorption. The intended effect was reduced blood sugar, which is what everyone needs to watch.

Here comes that fiber again, this time with another ally: magnesium, a mineral that is a known vasodilator — it widens, or dilates, blood vessels. Fiber is a required component of healthy digestion and waste elimination. Magnesium promotes circulation. Do the math!

Here’s another reason to make okra a diet staple: to prevent the onset of kidney disease. The effects of okra as an antidiabetic substance were analyzed intensively not five years ago in a famous study. Rats in chemically-induced diabetes states were subject to the study. The results — the first of their kind — showed that blood glucose normalization was indeed a recognizable benefit of the okra plant.

Okra’s previously-reference nutrient roster makes it a slam-dunk for inclusion in the diet of pregnant women. Vitamins A, B1, B2, B6, C, along with folic acid and trace amounts of calcium and zinc, make this great plant food a no-brainer. Those vitamins and minerals, plus fiber, also help out with pregnancy-related constipation.