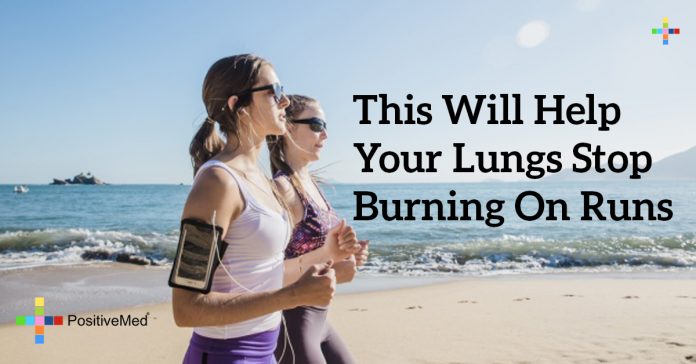 THIS Will Help Your Lungs Stop Burning on Runs

With warm weather fast approaching, the decision to get in shape brings about many new fitness routines. So, with a new pair of running shoes bought, newbies to the world of running will head outdoors to put their plan into motion. After they’ve stretched, they start off in a light jog feeling like a champion who’s already crossed the finished line. Feeling exhilarated, new runners will break into a sprint wanting to run like the wind, only to be cut short because it feels like their lungs are on fire.

For those who are new to running, it’s not uncommon to experience burning in their lungs when they start running. When a person breathes through their mouth, it tricks their brains into thinking that they are losing carbon dioxide, so their bodies goes into survival mode and produces goblet cells. It’s these cells that produce mucus, constricts the blood vessels and slows breathing. This unpleasant phenomenon disappears as runners become more experienced.

In addition, to proper breathing techniques, there are many factors that play a role in a runner’s performance during running. For example, the amount and quality of sleep someone has the night before, diet and stress levels all need to be in check in order to maximize their running ability. But many people don’t know that regulation of breathing when running has serious impact on their energy levels. Here’s a breakdown on how runners can power their muscles with fresh oxygen on each and every stride they take.

To maximize their efforts, runners must learn to breathe deeply. The lungs are only a little smaller than one’s rib cage, but many people tend to only use the top third when breathing.

When runners breathe deeply, they expand their lungs, pressing the diaphragm down. This causes the abdomen to expand when their lungs fill with air. Learning to breathe properly when running not only helps runners take in more oxygen, but it will also prevent them from feeling dizzy and feeling nauseous. In addition, runners will be able to breathe to their fullest potential and ultimately increase their endurance. Combining Pilates and yoga can help novices perfect their breathing technique.

RELATED ARTICLE: Fitness Expert Reveals How To Build Muscle As A Beginner

One way to master this skill is to match one’s breathing to their steps. When jogging causally, inhale for every three or four steps, then exhale slowly for the same amount. When running more intensely, it’s necessary to increase one’s breathing tempo to support the increase in energy output-take one breath in for every two steps and then out for every one to two steps. If new runners have difficulty matching their steps to their breathing, then they need to slow down and sync their breathing with their running.

As with any exercise program, it takes time to build up strength and endurance. Trying to do too much can result in a possible injury. It’s very common for new runners to start with a lot of gusto, but because of the inability to gain momentum, they often give up. Pacing oneself and slowly adding more time with each subsequent run is the best route to go.