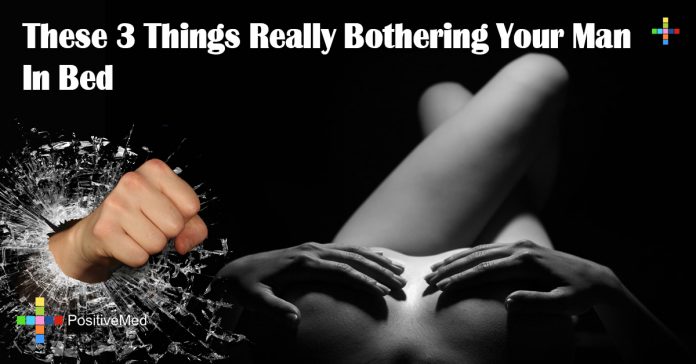 These 3 Things Really Bothering Your Man In Bed

There are three things that really bother your man in bed. He might not tell you about them because he values the relationship, but he might be thinking them. He goes through his day worried about finances, life’s insecurities and pressures in his job. It’s important that you have an honest look at yourself and with him to find out if any of these are a problem in your bedroom. You don’t want him to be worried there too. It should be a safe zone for both of you.

When you’re confident in your body as well as in your relationship, you’re not afraid of having the lights on, experimenting in bed and telling your man what turns you on there. Psychologytoday.com reports that a male’s $exual confidence can be undermined by a woman that doesn’t express her needs. They feel like there’s a burden to perform. It’s like they’re taking a pop quiz without having studied first. They don’t know the answers and start winging it. While you might like the guy to make his moves without a lot of input from you, there’s a time when you have to give him pointers and verbalize what you need from him.

Along with the confidence to express your needs, a man finds his woman’s confidence refreshing. They don’t care about the stretch marks on your upper thighs. They don’t care that you have a slight bulge here or there. When he’s in bed with you, none of that matters to him. When you’re shy, withdrawn and afraid to show your body, you’re not giving yourself to the experience of the moment. You’re dwelling on whether he’ll notice that your thighs are a bit meatier. He wants you in the moment with him and exploring the connection you’re having.

Always Having to Initiate in Bed

According to Women’s Health, experts report that a man wants his woman to take more initiative. They don’t want to be the one to initiate things in the bedroom every single time. Don’t be afraid to talk dirty to your man. Tell him exactly what you want him to do to you. On the other hand, you can also tell him what you’re going to do to him. Either way, it’ll show him that you’re interested.

RELATED ARTICLE: 6 Things Your Husband Wants You To Know, But NOT Telling You About

Everyone wants to be desired, and if you never initiate an encounter with your man, he’ll wonder if you find him desirable at all. You don’t have to be aggressive if that isn’t in your nature, but you should find a way to tell him that you want him. It could be as easy as saying those very words.

The man in your life worries about satisfying you in bed. He wants to be a good lover. You can help him in that regard. If things could be better in the bedroom, you should give him hints and tips during the act. It doesn’t have to be aggressive commands, but encouragement and subtle direction will help him navigate your body. You know your body and erogenous zones better than anyone. This isn’t a secret you should keep to yourself.

After it’s over, you don’t have to give him a high five on a job well done, but a few words about how it was couldn’t hurt either. If you were worried about something, you’d want reassurance from him, so it doesn’t hurt to be supportive of him as well. Make sure he knows that he’s doing the right things in the bedroom.

It’s important to evaluate yourself and your relationship occasionally. You’d want him to reassure you and stop you from worrying. You should do the same for him. Initiate in the bedroom more often. Be confident in yourself and your $exuality. He’ll appreciate the effort.