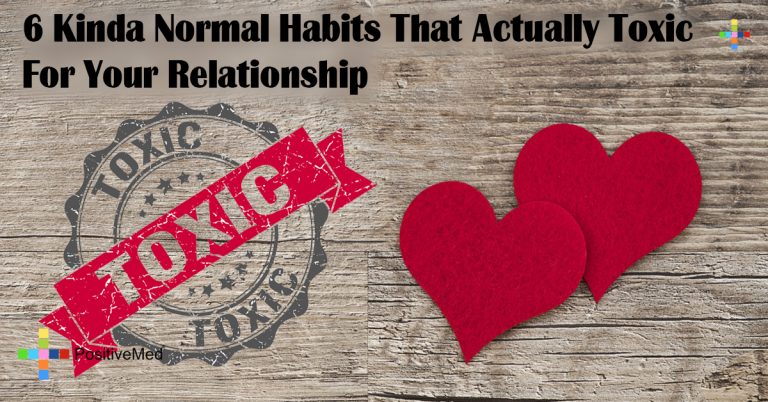 6 Kinda Normal Habits That Actually Toxic For Your Relationship

When it comes to being in a relationship, each person often brings their habits and personality traits that can shape the bond that is formed. For many people, it can be easy to have toxic habits that are unhealthy for the relationship. When evaluating a romantic connection, there are a few habits to avoid to ensure that the relationship thrives.

1. Bringing Up the Past

Using examples from the past to argue a point or hurt the other individual can be damaging to the relationship and cause distance between both people. If you’ve forgiven the other person for past mistakes, it’s important to avoid bringing it up again. This can make the current issue even larger than it really is by trying to make the other person feel guilty.

Many people assume that giving their significant other the silent treatment or acting passive-aggressively is normal. This is toxic to any relationship because it puts communication on the back burner and will cause you to be on different pages. Your partner may not know why you’re upset and will likely not change because they aren’t aware of your needs. Remain open with your feelings while still making a point to encourage the individual if you have a bit of correction.

According to Businessinsider.com, many people assume that it’s healthy to let conflicts be unresolved to avoid fighting. It can be easier to ignore the issue and move on than to address it directly. Some people may also think that if they fight that the relationship will only get worse or will suffer. Unresolved issues never really go away and will continue to remain a problem until they’re settled.

RELATED ARTICLE: 3 Relationship “Red Flags” That Actually Could Be The Signs Of A Healthy Relationship

4. Spending Too Much Time Together

Many couples are used to spending every day together and may only be happy when they see each other. It can be easy to become wrapped up in the relationship and lose yourself in the new bond that you’ve discovered. Although it’s important to remain close to the one you love, it’s also healthy to have time apart to maintain your independence and avoid co-dependency with your partner.

Experts recommend spending time with other friends outside of the relationship or maintaining hobbies that are not related to your partner. Having your own time away from one another will keep the fire alive and will prevent boredom that can develop.

According to Leadership.ng, many people think that their jealousy for their partner is normal and healthy to protect their relationship and keep the passion alive. Small bouts of jealousy can be normal among most partnerships but can lead to too much control in some cases. Some partners may begin to become jealous if their significant other texts, calls, or even sits next to someone of the opposite $ex. They may begin to stalk you or search your phone to see if you’re unfaithful.

Too much jealousy can also mean that there’s a lack of trust and that the relationship will not thrive. If you feel smothered by the other person, they may lack self-confidence or have deeper issues that are unresolved.

6. Trying to Change The Other Person

It can be easy to enter into a relationship without realizing that it’s healthy to accept the other person’s flaws. Many people try to change the person that they’re with in an attempt to improve the relationship or make it easier on themselves. Although it may be inconvenient to deal with annoying habits or certain personality traits, it’s important to allow them to be themselves to ensure that they feel accepted.

RELATED ARTICLE: This Short Word Is Killing Your Relationships And What You Can Do About It

If you want your relationship to thrive, you’ll need to avoid toxic habits that are often common among couples. It will not only allow you to enjoy a healthy and balanced bond with the one you love, but will improve your chances of staying together long-term.