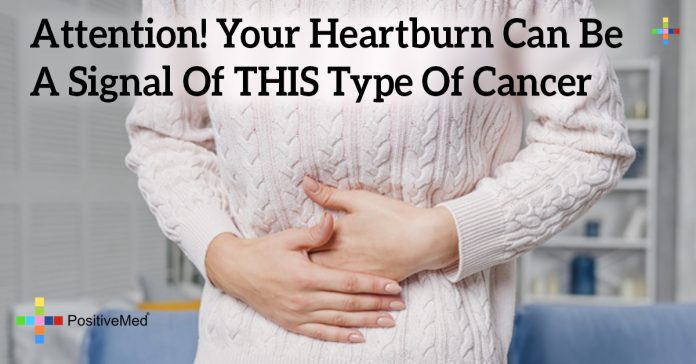 Attention! Your Heartburn Can Be A Signal Of THIS Type Of Cancer

Starting with a chronic backwash of stomach acid up into the esophagus when you’re lying down or slumped in a chair, the mucous membranes of the esophagus become inflamed.

This leads to changes in the tissues, called metaplasia. The condition of having metaplastic changes in the esophagus is called Barrett’s esophagus, a severe form of GERD. If the changes continue, metaplasia becomes dysplasia, which is basically pre-cancer leading to high-grade dysplasia, where cancerous cells are now present. The last step is adenocarcinoma.

Only about 3 to 6 people in 100,000 develop adenocarcinoma of the esophagus, but the percentages are increased in people with GERD and greatly increased in those with Barrett’s esophagus. The risk of adenocarcinoma with Barrett’s esophagus is about 10 in 100. Men are much more likely to develop this malignancy than women and the risk increases with age. Most esophageal cancers develop after age 60.

RELATED ARTICLE: How to Cure Indigestion and Heartburn Naturally

The commonest symptom of a cancer is dysphagia, difficulty swallowing. At first swallowing solid foods becomes painful with a feeling of something stuck. Later even liquids are hard to get down. Weight loss is another frequent symptom, along with a dull pain felt in the pit of the stomach or the lower chest. A hoarse voice, a chronic cough or bone pain can indicate the spread of the malignancy.

At a time when many cancers are becoming less frequent, adenocarcinoma of the esophagus is increasing, about 6 times more common than 3 decades ago. Some studies indicate that this increase may be due to the epidemic of obesity in America, which is another risk factor for esophageal cancer because obesity is associated with GERD. Smoking also increases the risk.

There are some changes you can make in your life to prevent this cancer. Above all do not smoke – or quit if you smoke. Keep your weight down with a healthy diet and daily exercise. Keep your alcohol intake moderate. Eat a diet with lots of raw yellow and green vegetables and fruits, but avoid anything that causes heartburn, such as citrus, onions, chocolate, tomatoes and spicy or fried foods. Tea is known to be preventive, but drinking liquids that are excessively hot are harmful.

Preventing Barrett’s esophagus would reduce the chances for cancer, but at least 25% of people with the condition have no symptoms. Talk to your doctor, get regular checkups. You may need an exam to look inside the esophagus. And eat your vegetables, just like your mother told you.