A Type of Testing That Helped Her Prevent Cancer 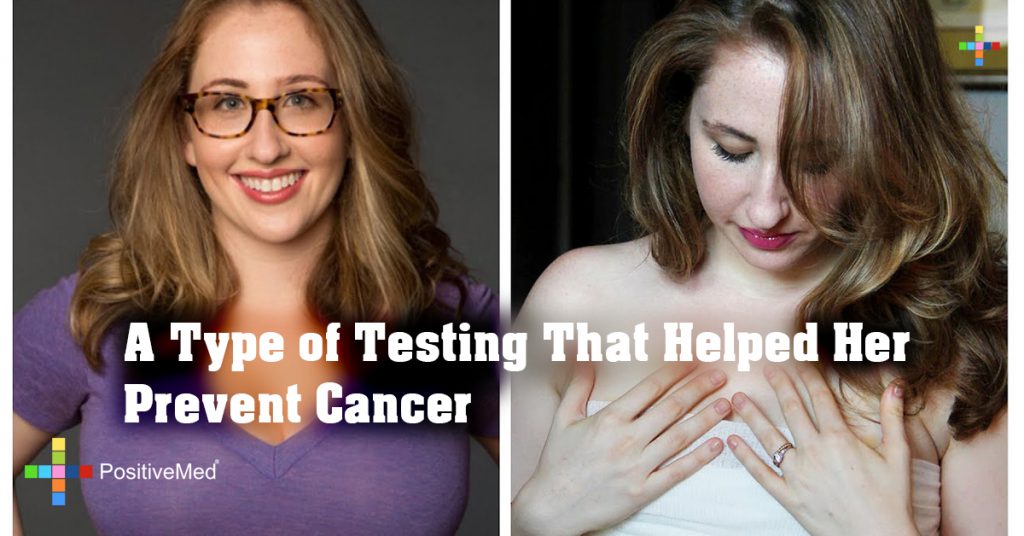 A Type of Testing That Helped Her Prevent Cancer

Advances in medicine and technology have significantly improved our ability to diagnose, treat and even prevent certain diseases. Mutations in the BRCA1 and BRCA2 genes, for example, indicate an increased risk for developing breast and ovarian cancer. Early detection of such mutations can prevent cancer, especially in the early stages. Despite this, many individuals choose not to undergo genetic testing, oftentimes because they are afraid of the results.

Such was the case for a young woman named Caitlin Brodnick, whose father had begged her to get tested. For years Caitlin ignored his advice. She knew there was a history of cancer on her father’s side of the family and was too frightened to get tested. When she was 26 years old, Caitlin realized she couldn’t put it off any longer. She finally met with a genetic counselor and got herself tested.

When her results came back she was devastated. Caitlin had tested positive for the BRCA1 mutation. Her worst fears realized, she and her genetic counselor began discussing her next move. As she considered her options, she remembered hearing a story about Angelina Jolie. The actress had undergone an elective double mastectomy after testing positive for the BRCA1 mutation.

Caitlin was both heartened and inspired by Jolie’s bravery, and decided to follow her lead. At the age of 28, Caitlin had a preventative double mastectomy. Afterwards, she said it was the best decision she ever made.

Caitlin is just one example of a larger trend. In recent years, genetic testing has become increasingly prevalent among women. Together, the BRCA1 and BRCA2 mutations account for nearly 25% of hereditary breast cancer and 15% of all ovarian cancers. Both breast and ovarian cancers typically appear at a younger age than other cancers, making early detection even more important. The BRCA1 or BRCA2 mutation can be passed on from one or both parents. A person with one normal copy of the gene is still at risk for the effects of the mutated gene.

While the effects of some genetic variants are well understood, many are not. Understanding the effect of a particular genetic mutation is incredibly important in terms of diagnosis and treatment. The combination of specific genetic variations with certain environmental factors are though to cause many common diseases. Such interactions have been found to contribute to diabetes, Alzheimer’s, asthma and various cancers.

An individual’s genetic makeup can do more than point to potential hereditary conditions. Our genes may also help predict how an individual will respond to certain medications and treatments. Children with a certain kind of leukemia can be tested in order to determine the ideal doses of chemotherapy. Genetic testing can also be used to determine the correct dose of antidepressants to treat certain mental illnesses.

An innovative genetic test may allow breast cancer patients to avoid needless chemotherapy. By examining a tumor’s genetic makeup, scientists are able to accurately predict the likelihood of recurrence. This means that many breast cancer patients would not have to go through chemotherapy after their tumor is surgically removed. The test could spare an estimated 14% of breast cancer patients from receiving unnecessary postoperative treatments. While chemotherapy undoubtedly saves lives, the side effects can be debilitating. The preliminary results of the test found that for 94% of the patients identified, their cancer did not return.

Improving the accuracy of genetic testing helps to better understand what causes disease. Years ago, the risk of heart disease was thought to be determined primarily by genetics. This belief led those with a history of heart disease to act as though they would inevitably develop heart disease themselves. Continued research has shown that genetics are only one of many factors.

Diet and exercise play a much larger role than previously thought in determining the risk for heart disease. By improving nutritional habits and increasing physical activity, individuals can significantly reduce their risk.

Genetic testing has come a long way, and will undoubtedly continue to advance. With each improvement, our understanding of disease grows. Only when a disease is truly understood can an effective treatment be created. We can only hope that one day healthcare will be based on wellness and prevention rather than treatment.